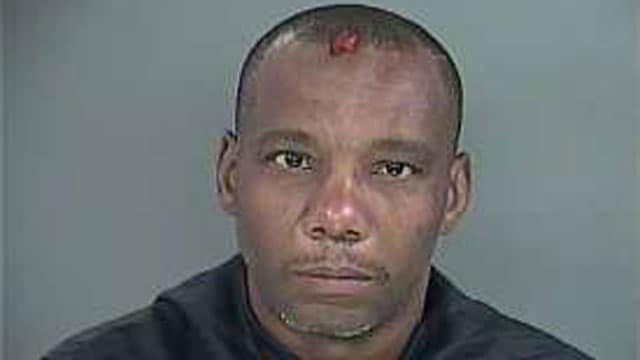 Apparently the elderly woman and her friend with the amputated foot wasn’t quite as easy a target as Richard Keese thought. (Photo credit: Anderson County Detention Center)

An elderly woman in Pendleton, South Carolina, shot at a man who broke into her home Monday afternoon and was beating her friend with a baseball bat, local media reported.

Last month, Frances Ward, 72, hired Richard Keese, 54, to fix her car last month, but when Keese showed back up at her house on Monday, he had ill intentions.

As Keese forced his way through the front door, Ward’s friend, who does not wish to be identified, grabbed a baseball bat for protection. But once inside the home, Keese simply snatched the bat from the friend and proceeded to beat her with it, throwing her up against a window and breaking the glass in the process.

But the 4-foot 10-inch tall Ward wasn’t about to stand by and watch her friend get beaten to death, so she grabbed her revolver and fired at Keese.

“If he hadn’t of been standing up, I would have hit him right here with the gun because I was aiming for his forehead to kill him, because he was beating the daylights out of her with that ball bat and I wasn’t going to let that happen,” the feisty grandmother told reporters.

When police arrived a few minutes later, they found Keese walking away from Ward’s home.

Both Keese and Ward’s friend were taken to a local hospital. The victim was treated for non-life threatening wounds and released the same day. Keese was treated and remained in police custody. It does not appear that Ward was injured during the incident.

Police originally believed that the bullet grazed Keese’s forehead, but they now believe that the injury on his head was caused by the victim during the struggle. Either way, the single shot from Ward’s revolver was enough to send him fleeing.

Keese is now being held at the Anderson County Detention Center where he faces charges for attempted murder, first-degree burglary and trespassing.

No charges are expected to be filed against Ward, who police say acted in self-defense.

And Ward is unapologetic and proud of herself for shooting at him, saying, “This could have killed her, if I had not shot at him.” Apparently, authorities agree with Ward since Keese has been charged with attempted murder.