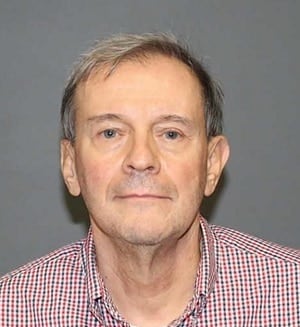 Police officers in Fairfield, Connecticut, confiscated more than 270 guns on Oct. 1 from a man who had a stockpile of chemicals and explosives.

Joseph Callahan, 69, was charged with 11 counts of illegal possession of explosives, one count of manufacturing bombs and six counts of reckless endangerment, according to the Connecticut Post.

Callahan, a retired chemist from Dupont and former gunmaker at Remington Arms, called the police to report a burglary at his own home, believing that some had stolen his prescription pills and a check.

When police arrived, they determined that his house had not been burglarized.  But they also discovered a rifle case lying on the living room floor and noticed a strong chemical smell emanating from a detached garage.

Callahan told the police that he uses the chemicals, e.g. 100 pounds of ammonium nitrate, 250 gallons of jet fuel, and explosives in the garage to build rockets, one of his hobbies.  And the jet fuel was for two classic corvettes. Callahan also said he was making a bomb for Rolling Stones rocker Keith Richards, the CT Post reported.

After finding the firearms, all which were registered, and the chemicals and explosives, they arrested Callahan.

“Anybody who makes bombs has some sort of nefarious reason for it,” Police Chief Gary MacNamara told a local CBS affiliate, in the immediate aftermath of the arrest. 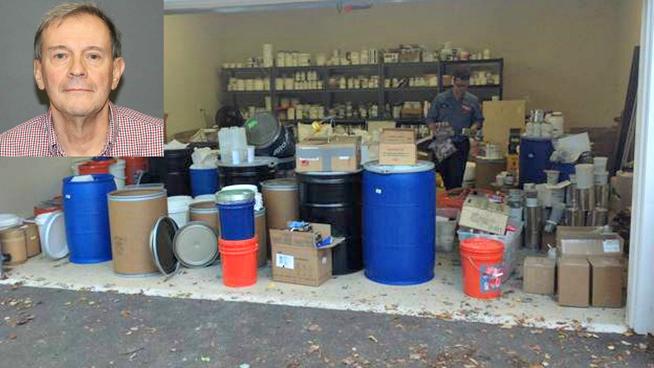 However, Richard Meehan, an attorney representing Callahan, said that he did not acquire the chemicals, explosives and firearms for “nefarious intent,” rather he gathered them over the years as a hobbyist and gun enthusiast.

“He’s a gun collector, and they’re all registered. They’re all legal,” Meehan told the Daily News on Tuesday. “In addition, he’s an amateur rocketeer. He shoots off his own small rockets, and a lot of what he had was related to the rocketry.”

“He’s even in the skeet shooting hall of fame,” Meehan added.

Meehan also explained to the Norwalk Patch that the recovered explosives were no more powerful than an M-80, which is a large firecracker and no where near as dangerous as a stick of dynamite.

Authorities released Callahan in lieu of bond on the condition that he would appear in Superior Court in Bridgeport Oct. 16.

Meehan said that Callahan is fully cooperating with investigators and the state’s attorney’s office.  He has also agreed to pay for the removal and disposal of any explosives or chemicals state officials deemed to be hazardous.

“Mr. Callahan has agreed to be responsible for the cost of removal and destruction of any items directed to be removed either by the fire department or DEEP [Department of Energy and Environmental Protection]” Meehan told the CT Post. “Those efforts will be completed this week.”

Assistant Fire Chief Christopher Tracy told the CT Post on Friday that “The scene is stable,” adding that the incident underscores the delicate balance between property rights and public safety.

“The question now becomes the property owner’s rights versus public safety, and having that array of chemical products in a residential area,” Tracy said. “It’s a very complicated scenario.”

Looking ahead, Meehan believes everything will get squared away.

“We are confident that after the remediation is completed and we address our efforts to resolving the criminal charges, that on a full review of the facts much of the confusion surrounding his possession of most of these items will be cleared up,” Meehan said. “Our goal is to work with the local and state authorities to make sure that there is no threat to the safety of the community or our client.”