Emily Miller, senior editor at the Washington Times and author of her recently released book, “Emily Gets Her Gun… But Obama Wants to Take Yours,” sat down with MSNBC’s Morning Joe to explain how AR-15 style rifles are functionally identical to hunting rifles.

Miller talked to MSNBC about ‘assault rifles’ and how they functionally identical to ‘hunting rifles.’

Miller said she didn’t grow up in a gun friendly family. In fact her father had owned a revolver but only recently revealed that fact to her after she wrote an article about guns. It wasn’t until Miller was the victim of a home invasion several years back that she purchased her first firearm. Since then, she has been an avid pro-gun supporter, MSNBC reported.

Miller said there was no functional difference between “assault weapons” and hunting rifles, reasoning that since most versions are semi-automatic, the only separation is their styling.

“The AR-15s and the ‘military assault weapons’ and these ‘military style’ ones that everyone’s scared of… they are 100 percent not nay functionally different than a hinting rifle,” Miller said. “Nothing. They just look like military rifles.”

Mark Halperin asked if any weapons should be outlawed in the United States. Miller answered that the laws already in place to restrict certain types of firearms should remain place.

“Why draw the line at those?” Halperin asked. 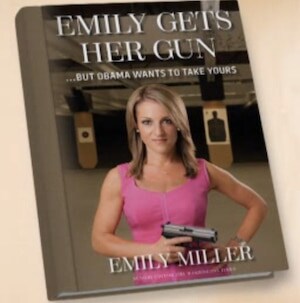 After experiencing a home invasion several years ago, Miller bought her first firearm and soon after, wrote a book.

“Because those are weapons of war. Those are automatic machine guns,” she answered.

In the back and forth that followed, Halperin pressed Miller for a reason that certain guns should be banned while others shouldn’t, especially if Halperin wanted to use a certain style of rifle in his own home for self defense.

Miller’s interview on MSNBC took place on September 16, just days before the Navy Yard shooting. But the network chose to air the show October 10.