The FBI released the National Instant Criminal Background Check System figures for September 2013 and this year is still on track for processing the most background checks since the system launched. 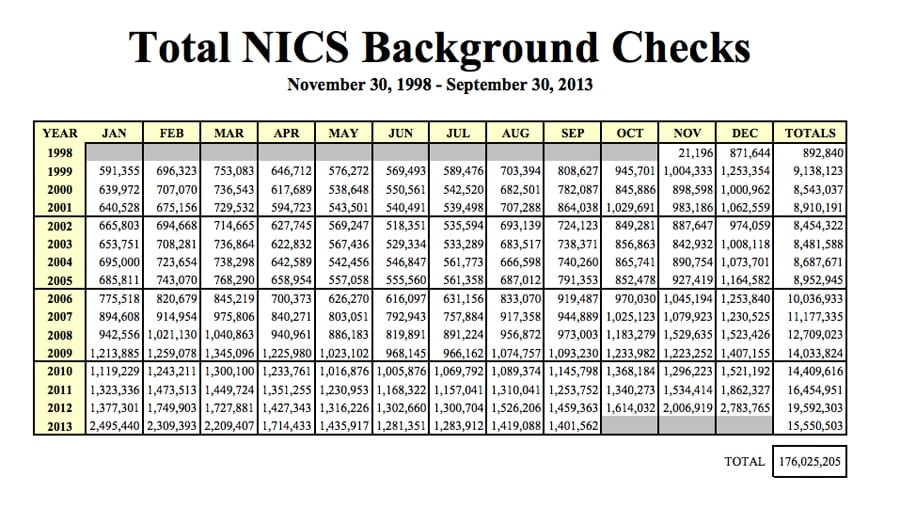 Although this data does not represent the number of firearms sold, it does give an indication of how well the gun market performed.

For a more accurate indication of gun sales, the National Shooting Sports Foundation adjusts NICS data by subtracting out CCW permit application checks as well as checks on active CCW permit databases. The NSSF-adjusted NICS figure for September 2013 is 1,034,701, which is actually an increase of 2.7 percent compared to last year, meaning there were a higher percentage of people checked in order to buy a gun.

If the number of background checks continue to rise as they have since January, or even July, 2013 will be another record year (it already has seven of the 10 biggest weeks). It is also a possibility that there will be a spike in background checks due to the shooting at the Washington Navy Yard in September that resulted in the death of 13 people. It’s common for gun sales to go up after a shooting tragedy due to fear of lawmakers discussing tougher gun laws or just plain old fear of another tragedy.

While there is a possibility that the raw number of background checks will decline overall due to recently enacted gun control laws, which ban gun styles, accessories or limit magazine capacity, in states like Maryland, Colorado and Connecticut, it’s a slim possibility. For example, if you consider New York, where lawmakers passed some of the strictest gun control laws in the nation, background checks peaked and then had a sudden drop, but they descended from a figure inflated by last chance shopping and steadied on an above average number.