Natalie Foster for NRA News talks about the irrational fear of firearms, and gives a few tips on how to get over it.

As she locks back the slide on Glock, Foster says, “This is a firearm. You’ll notice that it does not simply go off at will. Amazing, right? This is an inanimate object. It has no soul, it has no brain. It cannot harbor evil intentions, or good ones for that matter. It is perfectly neutral.”

Foster relates the irrational fear of firearms to the phobic response many people, including herself, have to spiders. She goes on to reason that a poor way to get over a phobia is to watch all the terrible things that have ever happened because of your fear, like gun violence in the media or spider related deaths. 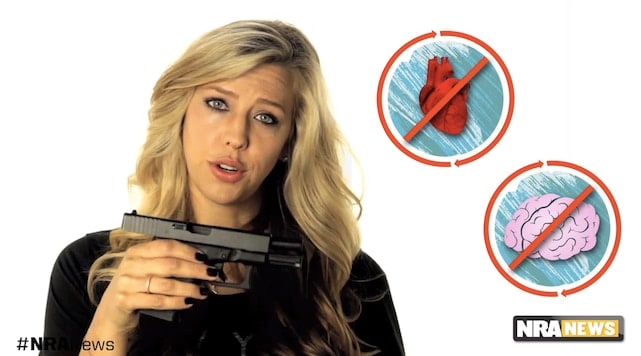 Foster said guns don’t have a life of their own, and that they are “perfectly neutral” objects.

She offers instead a more cognitive solution to fear, suggesting those who can’t stand guns, or spiders, talk to somebody who specializes in those things and knows them intimately. That way, you can have an accurate portrayal of the object you fear and hopefully, have a more appropriate response to them.

Foster says people who an extreme fear of guns can either scour YouTube for every mass shooting video they can find, or spend their time educating themselves on the role guns play in our society.

“Are you feeding your irrational fears, or dismantling it with facts?” She asks.

Trying to hit a chord with those who cower at the mention of firearms, Foster explains that “guns deserve a rational, logical level of respect. But when a healthy respect becomes an extreme, undeserved fear – you create unnecessary problems for yourself.”