The 84-year-old man alleged to have pointed a gun at two anti-Obama protestors in Gwinnet County, Georgia, was arrested.

Overpasses for Obama’s Impeachment protestors, Toni Pendley and Marge Moore, were on Steve Reynolds Bouelvard when a man, later identified as Roy Smith, pulled alongside the women in his maroon colored car and pointed a gun at them.

“I was standing there with a sign and I looked, and he had a gun pointed at me,” Pendly told WSB-TV last week. “He was looking straight at me.”

An observant witness saw the incident and called 911, telling the dispatcher the license plate number. Detectives said they used that information to find out where Smith lived, WSB-TV reported.

Officers from the Gwinnett Police Department arrived at Smith’s residence, but he wasn’t home. After obtaining a search warrant, officers inventoried Smith’s vehicle that was parked in his driveway, and found a Colt .32-caliber pistol in the driver’s side door that matched the witnesses’ description.

According to police, Smith said he “kept the weapon in the vehicle for the carjackers,” and that while he did have the weapon with him on the day of the incident, he did not point it at the protestors. Instead, Smith flipped the situation on the women, saying “everyone was lying on him in an attempt to get him into trouble.” 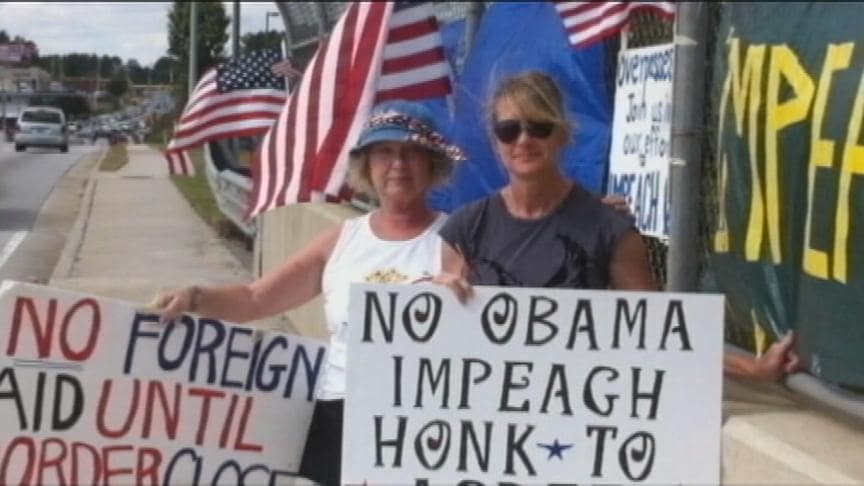 Pendley and Moore refused to let fear control their protest. They returned to protest in the same spot the next weekend.

Gwinnett Police Cpl. Ed Ritter understands that Smith may be advanced in age, but that doesn’t excuse him for his actions.

“Doesn’t matter what his age was,” Ritter said. “He still threatened somebody with that gun and he is being held accountable for it.”

Ritter added of Smith, “Not your typical suspect.”

Smith was released on a $1,000 bond, and according to WSB-TV, his maroon car was back in his driveway.