Bloomberg on Colorado recall: "What do you mean we lost?" 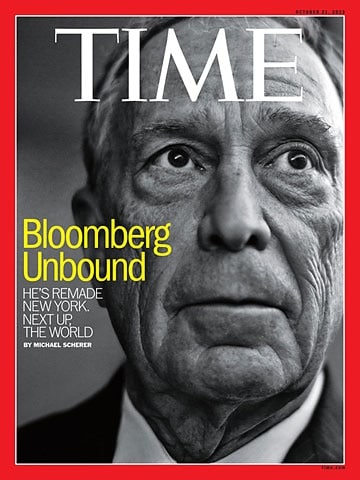 A classy portrait of NYC Mayor Michael Bloomberg on the cover of Time Magazine.

While Bloomberg didn’t precisely use the words “sacrificial lambs,” he essentially said as much in an interview with Time Magazine, when he rejected the notion that the recall was a sign that his side had lost in Colorado.

“What do you mean we lost?” Bloomberg told Time. “I’m sorry for those two people. But we won in Colorado. On to the next state.”

The “two people” he is referring to are Senate President John Morse (D-Colorado Springs) and Sen. Angela Giron (D-Pueblo), both strongly backed bills to ban magazines that hold more than 15 rounds of ammunition and to require background checks for private transfers, including those made over the Internet and at gun shows.

In March, Democratic Gov. John Hickenlooper signed those bills into law. They were the legislature’s response to the mass shooting at Sandy Hook Elementary in Newtown, Connecticut, in December 2012 and the movie-theater shooting in Aurora, Colorado, in July 2012.

The bills were strongly opposed by gun owners and gun rights advocates. In the ensuing months, several lawsuits were filed challenging the constitutionality of the new laws, including one that was spearheaded by at least 50 Colorado sheriffs.

With the lawsuits pending, several gun rights activists got together and started a grassroots recall effort targeting the senate’s most vulnerable lawmakers: Morse and Giron. Now that they’ve succeeded in unseating Morse and Giron, they’re focusing their efforts on state Sen. Evie Hudak (D-Arvada and Westmister).

“She has infringed upon our constitutional right to bear arms,” said “Recall Hudak Too” in a statement, as reported by the Huffington Post.

Hudak has been mired in controversy leading up to the recall, particularly during the gun control bill public hearings after she rejected testimony from Amanda Collins, a rape survivor, denying that carrying a gun could have prevented the crime, as noted in a previous Guns.com article.

Yet, despite all this backlash, Bloomberg appears to be undaunted. As long as those laws stay in place, it doesn’t matter who loses their job, he’s won, he’s foisted his gun control agenda on another state.

Looking ahead, Bloomberg plans to continue the fight no matter what the cost. It appears his pride won’t let him quit.

“A lot of elected officials are afraid to back controversial things. I’m not afraid of that,” Bloomberg told Time. “You’re not going to hurt my business, and if you are, I don’t care. I take great pride in being willing to stand up.”

Bloomberg’s got billions. He can afford to do what he wants, regardless of the political fallout. However, other politicians aren’t so lucky. The question is: will other lawmakers be willing to be pawns or sacrificial lambs for Bloomberg’s agenda?