A Georgia woman is left heartbroken after a state probation officer fatally shot her 12-pound dog on Thursday.

Cherrie Shelton told FOX 31 that when Officer Antoine Jones approached her house to conduct a field visit, her 12-pound Jack Russell Terrier, Patches, bolted out the door with excited barks to greet the man. 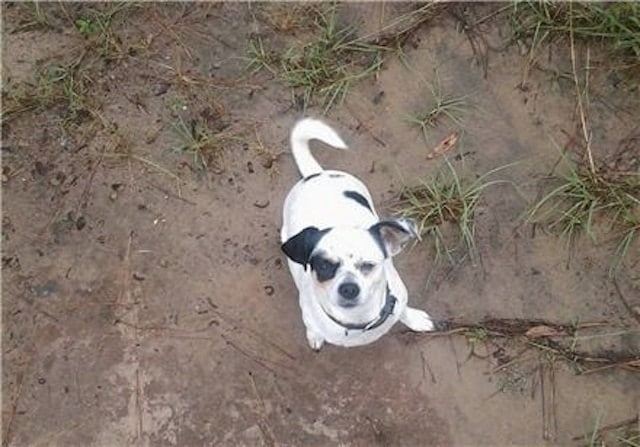 Patches, a 2-year-old, 12-pound Jack Russell Terrier, was fatally shot by a probation officer during a routine visit.

Shelton followed closely behind and as she reached the top of her steps, she started telling Jones — who stand at 6-feet tall and weighs nearly 300-pounds — that Patches didn’t bite. But she was interrupted by the sharp sound of a gunshot. Jones had already cleared his holster and fired before Shelton could do anything to stop it.

The officer had shot Patches. Shelton immediately interrogated the officer, asking why he would shoot her dog when it posed no threat. He claimed he feared for his life.

The bullet went through Patches and came to rest in the dirt. Patches, mortally wounded, whimpered into a corner where he lay for half an hour before finally passing away.

Jones filed a report about the incident with the Albany Police Department. The responding officer quoted Jones in the report, saying, “He stated that he gave the dog verbal commands to get back but the dog continued to come towards him in an aggressive manner so he fired one shot at the dog using his duty weapon.”

Shelton struggles to understand why the officer reacted with lethal force, but fights to press forward with her life.

Shelton said she is struggling to adjust to the situation and cannot understand why a man of Jones’ stature would fatally shoot an animal so small, especially when a viable less-than-lethal alternative was available.