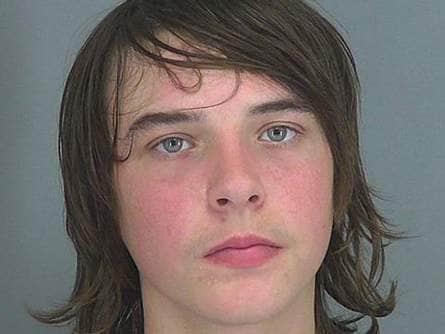 This was the fourth time Daniel McAbee, 17, has been arrested this year.

A 17-year-old boy was arrested Tuesday after he brought a pellet gun onto a high school campus in Boiling Springs, South Carolina, prompting the school to go on temporary lockdown.

Daniel McAbee was sitting in a car outside of the school waiting for his mother who had come to the school to bring her other son an inhaler. According to the police report, while his mother was inside, another student who was sitting in the car parked in front of McAbee’s saw him “cock” a handgun.

When that student’s mother returned to the car, she told her what she had seen. At that point, the mother turned around and looked at McAbee, who then, according to the mother, pulled the hood of his sweatshirt up over his head.

The mother drove away, called the school to inform them of the situation and dialed 911.

The school immediately went on lockdown.

Initially, the school’s principal, Chuck Gordon, approached the car and asked what McAbee was doing at the school. He explained that he was waiting for his mother who was inside delivering an inhaler to his brother.

Spartanburg County deputies arrived and, along with the school’s resource officer, approached the vehicle again. The SRO immediately recognized McAbee as a former student at the school and went to talk with his mother inside, who consented to them searching the vehicle. 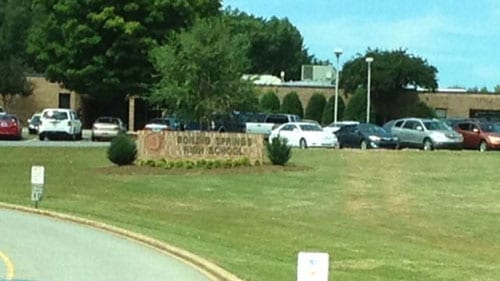 The lockdown at the Boiling Springs High School lasted for about 35 minutes. (Photo credit: Fox Carolina)

The resource officer found a black hoodie and a ski mask sitting on the back seat, as well as the pellet gun under the seat. Officers took McAbee into the principal’s office, where he said that he didn’t know it was illegal to have a hoodie and ski mask at the school, claiming that he didn’t even know the BB gun was there.

As the conversation continued, McAbee was not cooperative with authorities and eventually became belligerent, cursing at the officers, who had previous dealings with him.

McAbee, who is being charged as an adult, was arrested for disturbing school and possession of a weapon on school grounds. According to a local report, this was the fourth arrest for McAbee this year.

Because McAbee violated a previous bond, the judge set his bond at $2,000. However, if released on bond, McAbee will remain on house arrest and wear an ankle monitor.

“We appreciate the cooperation we received from all students on campus and the quick response of school staff and law enforcement in getting the situation taken care of quickly,” Gordon said. “The safety of our students is always our first priority.”

Lt. Tony Ivey of the Spartanburg County Sheriff’s Office said that McAbee never left the car with the pellet gun or pointed it at anyone and there was never a threat to any of the students or staff.