Gov. John Hickenlooper has a message for national gun-control groups that spend money fighting recall efforts in Colorado: stay away.

“Colorado is a state that people like to be themselves and solve their own problems,” the Democratic governor said in an interview with USA Today. “They don’t really like outside organizations meddling in their affairs, and maybe the NRA gets a pass on that.”

“But (it is) probably not a bad idea” for gun-control groups, such as Mayors Against Illegal Guns, New York City Mayor Michael Bloomberg’s organization, to stay out of Colorado if gun-rights supporters get enough signatures to hold a recall election on state Sen. Evie Hudak (D-Denver). 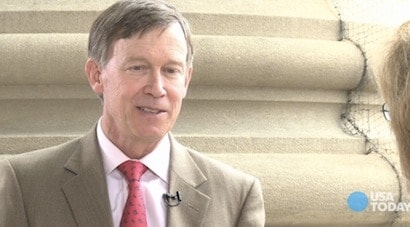 Like her now-out-of-work Democratic peers, Hudak strongly endorsed the state’s new gun control laws, which require require background checks for private transfers or gun sales, including those made over the Internet and at gun shows, and ban magazines that hold more than 15 rounds of ammunition.

Hudak also made some controversial remarks at a public hearing on gun control earlier this year, rejecting testimony from Amanda Collins, a rape survivor, denying that carrying a gun could have prevented the crime.  If Hudak loses her job and the Republicans take her seat, the Democrats would no longer have an 18-17 majority in the Senate.

The deadline to collect and turn in the 18,900 signatures required for the recall is Dec. 3.  Asked whether recall organizers would hit their mark, the governor said it was essentially a coin toss.

“They’re well-funded and there’s a lot of energy behind this, a lot of frustration,” Hickenlooper said. “I’m going to guess it’s probably 50-50” that they will be able to get the recall vote on the ballot.

But, he added, “I didn’t think they’d get enough signatures for the first two.”

Via Mayors Against Illegal Guns, Bloomberg spent $350,000 on the anti-recall campaign of Morse and Giron.  Many believe that this out-of-state donation backfired in that it only served to give more momentum to the recall effort, which may be the reason Hickenlooper is cautioning national gun-control groups to not get involved this time around.

Hickenlooper was also asked about the ongoing effort to pass tougher gun laws at the federal level.  He was skeptical about the chances of reforming the nation’s gun laws.

“We have this tradition of the Second Amendment and people’s rights to self-defense and a certain suspicion that the government can’t be trusted,” he said. “That’s going to make it very difficult. I think any progress in terms of even universal background checks will be slow.”

Hickenlooper will be running for reelection next year.  It’ll be interesting to see whether he takes any campaign contributions from Bloomberg.