Juggernaut Defense may not be a common name in the world of smartphone accessories but they have several years of experience developing hardened cases specifically for use in harsh environments.

With the rise in app development, including GPS and location and unit coordination, consumer-grade electronics are increasingly being used in environments they were never intended for. With the speed at which these devices are being developed, by the time a company develops a specialized, ruggedized device, that unit stands a good chance of being obsolete before it sees anything resembling official adaption.

Juggernaut knows that it’s easier — and cheaper — to develop a case that allows users to take their own devices into the field than it is to develop a military-grade smartphone.

Now they’re looking to bring things into the mainstream, they just want a little help. Like many entrepreneurs today, they’re turning to crowdsourced funding through Kickstarter. They’re going for the brass ring; they want to develop a hardened case for the iPhone 5.

“We started developing the concept of ruggedizing smartphones in 2010 and designed our first case for the Motorola ATRIX that year,” explains the company on its Kickstarter page. “New designs followed for the Samsung Galaxy Note in 2011 using an end-door design which reduced the area of sealed opening to the absolute minimum.”

This isn’t the sort of rubber or plastic sleeve that simply covers the phone and keeps the edges looking new if dropped. They’ve developed a discrete, modular extender that maps the button controls to the exterior of the case, instead of using button extensions that can be hard to use and fail in harsh environments. This keeps the device sealed up but still allows normal control of the phone. 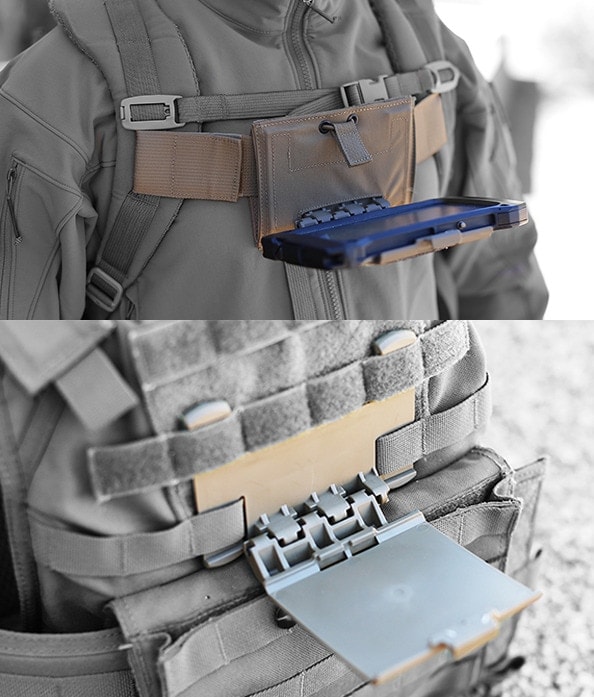 Seems like something Data from “The Goonies” came up with.

“We also developed a modular button module that could be used as the common interface to home, volume and power controls,” they continue. “We found that these buttons provide better user feedback than soft elastomer buttons (especially while using gloves).

“The Juggernaut Case was developed to bring the power of smartphones to the battlefield where they are used to enhance communication capabilities (i.e. sharing your location and knowing where your team mates are, marking locations, sending images and video). These are many of the same features and activities that are enabled by Apps for sportsmen.”

The case is designed to work with several mounting systems, including MOLLE and PALS. They have also developed two types of pack strap mounts as well as a forearm mount. The screen is protected by a thick 1.1mm etched glass spring that makes daylight reading easier without interfering with the touch interface.

Now they’re looking to raise $75,000 to get them into production as soon as possible.

“Juggernaut Defense has been involved in the development of many products and we have brought similar cases to market,” says the fundraiser page. “We understand the product development process is never easy and can involve surprises but we believe that we know how to work through any issues that pop up. We have lined up tooling and production suppliers that we have worked with before and have high confidence in. Prototype glass samples have been approved and are ready for volume production.”

Juggernaut has already outlined their production and testing standards, they just need help from their customer base. They have already developed the product completely, including fabricating and testing prototypes. They’re way ahead of the curve for most of these types of projects and their experience shows. They’ve mapped their production schedule and if they raise the money they need, will get these cases into backers’ hands by February 2014.

Like most crowdsourced projects, they offer different levels of reward for different levels of contribution. People can pledge anywhere from $10 to $400, with larger pledges being rewarded with Juggernaut Cases and different mounting options. The cases will be manufactured in four colors, black, flat dark earth, safety orange and arctic white.

An iPhone 5 is a very flexible tool, and its absolutely one of the best smartphones on the market. But it’s not for use in the field, whatever field that may be. If you’re looking for something decidedly better than a Magpul case, head over to the Juggernaut Case Kickstarter project page. It might be just what you’re looking for.