A Brazilian thief armed with a pistol was  shot and killed by an undercover police officer just moments after he stole a motorcycle from an unsuspecting motorist. The suspect stole the motorcycle at gunpoint.

The entire incident was caught on the victim’s helmet cam. As he speeds down the streets of Brazil, the motorist weaves between cars before slowing to yield for a right hand turn, according to a video posted on LiveLeak.

As his speed decreases, the threat increases. Armed with a revolver, the passenger of another motorcycle dismounts as he grabs the victim’s handlebars while jacking his bike at gunpoint.

Successful in his crime, the suspect prepares to drive his new motorcycle away, but is stopped in his tracks when an undercover cop slips out from a black van and shoots the criminal.

The other suspect speeds away, leaving his partner in crime wounded and lying in the middle of the street. Near the end of the 8-minute video, the suspect still shows signs of life, though the original poster on LiveLeak claimed the gunman later died of his wounds. 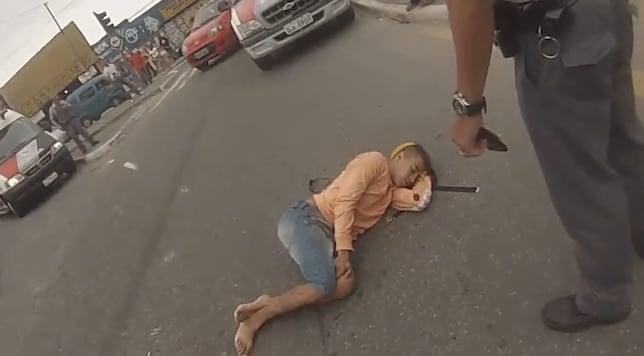 He was shot before he could get away.

This isn’t the first time Brazilian police have exacted their stringent justice. They’ve also been known for using snipers aboard a helicopter to open fire on cigarette thieves, ramming a drug-filled plane as it roars down the runway, and pursuing drug lords through the streets of Rio de Janeiro in wild car chases.