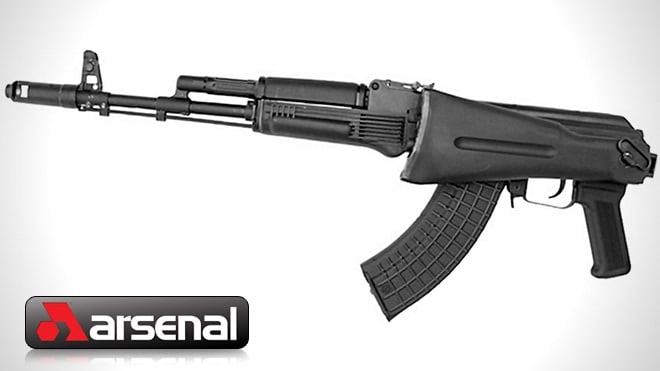 Arsenal is announcing the return of the SLR-107FR, one of their most popular AK-pattern rifles. This is a straight-forward stamped-receiver AK with a folding buttstock chambered for 7.62x39mm and probably the closest any American can get to owning a real AK-103.

The AK-103 is a select-fire rifle chambered for 7.62x39mm with a side-folding stock. It’s used by Russian special forces and anti-terrorist police units who prefer the .30 caliber cartridge over the 5.45x39mm AK-74M. It’s also manufactured for military export.

It’s everything that the AK-74M is but chambered for the original cartridge. It features the lightweight, stainless steel heat-sheilded polymer handguard, the new-style flash-hiding muzzle brake and reinforced dust cover and works with your standard 7.62x39mm magazines.

Arsenal brought back the SLR-107FR because of popular demand, and we’re surprised it was even pulled from their catalog in the first place.

That, SLR-107FR brings to the table the standard spread of Arsenal qualities. It’s built using new parts, Bulgarian and American, and is ready to accept U.S.-made magazines as well as foreign surplus.

The hammer-forged chrome-lined barrel measures in at 16.25 inches and is threaded for 24mm muzzle devices, has a 1 in 9.4-inch rate of twist with four grooves to prevent bullet deformation and to promote accuracy.

The stock folds to the left side and won’t interfere with the charging handle or ejection meaning it can be fired with the stock folded. The standard furniture is black although Arsenal is bringing back their desert sand model as well.

Each SLR-107FR comes with one 10-round U.S.-made magazine (not shown), sling, oil bottle and cleaning kit, including the under-barrel full-length cleaning rod.

If you’ve been looking for the perfect military AK analog chambered in America’s favorite AK caliber, then put this model back on your short list. It will run a bit more than many 7.62x39mm AKs, generally around $1,000 to $1,100, but there’s no doubt that with Arsenal you’re getting your money’s worth.

For all the specs on this rifle, check out the Arsenal product page, and if you’re in the market for one, start your search today.