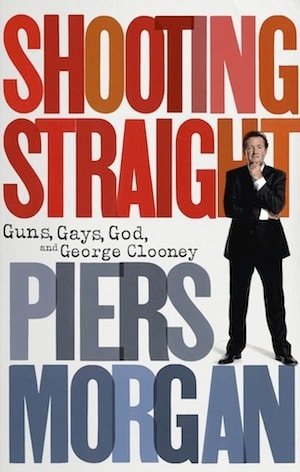 Maybe what he has to say about “…Gays, God, and George Clooney” is interesting.

Piers Morgan has a new book out called “Shooting Straight: Guns, Gays, God, and George Clooney,” that highlights among other topics his crusade to gut the Second Amendment to the U.S. Constitution.

I will not be purchasing this book nor will I make any attempt to read it beyond the few excerpts I read to prepare for this article. Why? Because I don’t like Piers Morgan.

My dislike for Piers Morgan has nothing to do with his political views or his stance on our right to keep and bear arms, rather it has solely to do with his journalistic pedigree — or lack thereof. To be frank, Morgan’s a crappy journalist. He sucks at his job. So time spent reading his book or watching his poorly performing show on CNN, Piers Morgan Live, is a waste.

You can tell a lot about a person by the way he refers to those he disagrees with. As a journalist, one is supposed to keep an open mind, remain objective, and be fair to the interviewee. When it comes to gun owners, Morgan is none of those things. He often comes across as a smug, hard-lined ideologue.

Consider this passage from the book in which Morgan discusses interviewing Larry Pratt of Gun Owners of America:

We booked Larry Pratt, executive director of a group called Gun Owners of America. He was sneeringly arrogant and defiant. “America is not the wild west you’re depicting,” he smirked. “We only have problems in our cities and in our schools where people like you have been able to get laws on the books that keep people from being able to defend themselves.”

This moron was actually blaming me for the Sandy Hook massacre. I stopped and stared at him for a second or two, trying to stay calm. Then I lost it. “YOU’RE AN UNBELIEVABLY STUPID MAN, AREN’T YOU?”

“You shouldn’t have called him stupid.”

“He’s got an opinion you don’t agree with, but one that many Americans do agree with. If you call him stupid, you’re calling every American that agrees with him stupid. That’s not smart.”

But within minutes, the “stupid” clip was blowing up on Twitter. And most of the reaction was strongly supportive. “I don’t want to curb your passion, or anger,” Jonathan added. “Just don’t be rude to them, don’t call them stupid.”

“All right, all right … I’ll call them idiots.”

Jonathan sat back in his chair and sighed.

Morgan’s producer, Jonathan Wald, is absolutely right. No reason for name-calling. It’s destructive not only to one’s argument but to one’s reputation. Given his years of experience working as a British newspaper editor, one would think that Morgan would be able to keep is cool and avoid the ad hominem attacks, but he cannot.

This was not an isolated incident. In the book, Morgan admits to wanting to punch law professor David Kopel, wanting to slap the “permanent sneery half-smirk” off of economist’s John Lott’s face, who Morgan also describes as a “clown” with “weird pointy bushy eyebrows.”

In a debate where facts and statistics matter, Morgan seems to have a habit of ignoring the truth and bending reality to fit his agenda.

Back in August, in an interview with political writer AWR Hawkins from Breitbart.com, Morgan falsely claimed Virginia had the highest murder rate in the country. Here’s a recap of the exchange from a previous Guns.com article:

“In Virginia there was a 16 percent increase in gun sales in 2012. That’s 490,119 guns were sold. Now you would expect, the way you speak Piers, for violent crime to rise proportionally. It didn’t,” Hawkins said. “It fell 5 percent. There were 4378 incidents of violent crime…”

Hawkins tried to go on to explain that number was down from 4,618 from the year prior, but Morgan cut him off, saying that the very state he just gave for an example, Virginia, actually had the highest murder rate in the country according to 2009 statistics by the FBI.

Nope. According to the FBI’s 2009 Crime In The United States report, Virginia is, in fact, behind 23 other states plus Washington, D.C. and Puerto Rico in the murder of non-negligent manslaughter rate per 100,000 inhabitants.

Morgan has repeatedly stated that he does not want to take anyone’s guns away. In a CNN interview, in which he discussed the release of the book, he said the following:

I’m not trying to grab people’s guns. Not a single proposal that I’ve seen by anyone in Washington actually means anybody’s gun gets taken away. This is all about, as you move forward, what type of guns should be in civilian hands going forward. And nobody can explain to me why anyone needs killing machines other than to kill lots of people.

For starters, this statement is self-contradictory. The point of Dianne Feinstein 2013 Assault Weapons Ban, as she stated, was to “dry up the supply” of certain firearms over time. Sure, there wasn’t a call to go door-to-door to pick up these firearms, but when the government prohibits the transfer, sale, manufacture, import, etc. of these firearms so that the become impossibly difficult to own or to pass along to one’s family members, it is a de facto form of confiscation.

Beyond that, Morgan’s been even more adamant about his position, telling Tennessee Sen. Stacey Campfield during an interview that, “I’m not in favor of talking anyone’s guns away. I’m not. I’ve never said that. That’s a complete lie.”

Well, the problem with that statement, as I pointed out before, is that Morgan has said that he favors confiscating firearms from law-abiding Americans. In short, he lied.

When he was on his show following the mass shooting at a movie theater in Aurora, Colorado, David Kopel told Morgan that there are 300 million guns in this country and then asked him, “How many do you think need to be confiscated to get to the appropriate level?”

To which, Kopel replied, “Okay, you want to confiscate every gun in the United States, that’s fine, I respect your position.”

Piers Morgan slightly qualified his remark, saying, “You asked me what I’d do personally, and I’d remove every gun in America … but I’m not gonna get what I want, which is no guns.”

See Morgan does support confiscation, he just knows that it’s politically impossible to pass one that requires government agents to go door-to-door.

You know, it occurred to me in writing this that Morgan might not even be a journalist. Perhaps I’m being too hard on him, holding him to a higher standard than I should. But even if that’s the case, that he’s just a talking head and not a credible source for news and information, than he still has to work on his image. It’s apparent that he’s struggling to get ratings. There’s been rumblings that he may even lose his job or his timeslot. If that happens, well, I can honestly say I won’t be surprised.