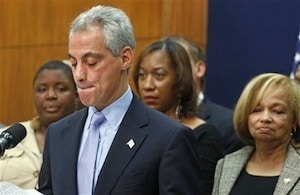 Chicago Mayor Rahm Emanuel at a press conference with a sour Jolly Rancher in his mouth. (Photo credit: Associated Press)

Everyone agrees that the level of gun-related violence in Chicago is unacceptable.  The question is, what can lawmakers do about it?

From Mayor Rahm Emanuel’s perspective, along with innovative police strategies and community outreach, increasing penalties for gun crimes is one way to save lives and curb the violence in the Windy City.

Specifically, Emanuel is pushing for a bill, HB 2265, sponsored by Democratic state Rep Mike Zalewski that would create a three-year mandatory minimum for aggravated unlawful use of a gun and a requirement that offenders serve at least 85 percent of their sentence, which is up from 50 percent.

“We cannot continue to allow criminals to escape with light punishment for committing violent crimes with guns,” Emanuel said at a recent press conference.

“The current penalties for illegal gun possession do not deter criminals and allow convicted gun offenders to quickly return to the street to commit violent crimes or be injured or killed,” he continued.

“I urge the General Assembly to pass this legislation and help prevent violent crime in Chicago and throughout the state,” Emanuel concluded.

Emanuel’s administration argued that as many as 100 individuals involved in shootings and murders this year in Chicago would have been behind bars and unable to commit their crimes if the tougher penalties were already in place.  Officials further estimated that at least 15 murder victims would have been saved if those individuals were in prison.

However, the National Rifle Association’s Institute for Legislative Action sees HB 2265 as being problematic for law-abiding gun owners, arguing that it leaves the door open for them to be unfairly prosecuted.

“If passed and enacted into law, HB 2265 could subject a new Illinois resident carrying a firearm for self-defense who may be unfamiliar with the state’s strict gun control laws to an overly harsh multi-year prison sentence,” wrote the NRA-ILA in a press release.

NRA lobbyist Todd Vandermyde was also critical of the bill, telling the Associated Press that he opposes three-year minimums for first-time offenders and that this measure is only a cosmetic solution to a systemic problem.

“The mayor is looking for a public relations solution to a crime problem that he can’t get his hands around,” Vandermyde told the NRA-ILA.

Folks from the gun community weren’t the only ones to criticize the HB 2265, the John Howard Association, which evaluates and monitors the prison system, argued that studies show that longer sentences don’t necessarily deter crime and funding for programs to reduce recidivism and overcrowding are tight.

“There is nothing magical about a prison cell. It can restrain a person who poses a violent risk to public safety, but it is extremely expensive and difficult to try to make it do anything else,” said John Maki, the group’s executive director, in a statement.

But Emanuel’s administration rejected the argument that HB 2265 would be costly, citing a analysis by the University of Chicago that claimed that in one year the bill would have prevented over 400 violent crimes by keeping violent criminals in prison, saving the state $700 million in costs associated with those crimes or five times the costs of incarcerating those individuals.

So far, the bill has been embraced by Democratic leadership in the state House and Senate.  On the GOP side, leaders questioned whether the measure would mistakenly target otherwise law-abiding gun owners as the NRA contended.  That said, both Senate Republican Leader Christine Radogno and House Republican Leader Jim Durkin acknowledged that they haven’t made up their minds yet. 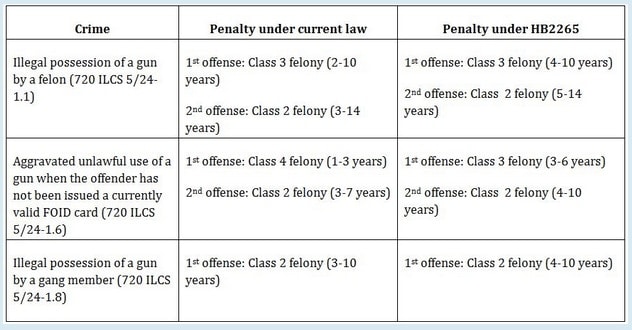 HB2265 would increase sentences for several, common gun crimes and require that individuals convicted of those crimes serve at least 85 percent of their sentences.

What are your thoughts? Should gun owners support HB 2655?