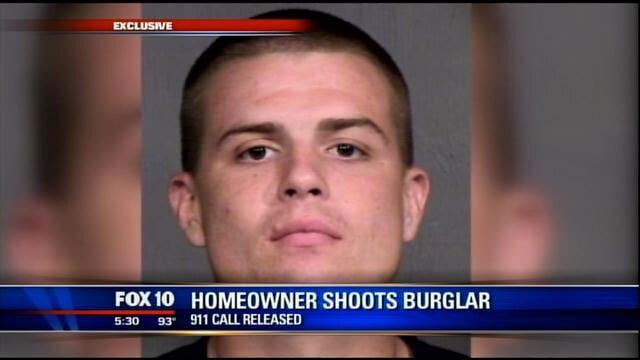 Right before he was shot, Aaron Fisher, who has a prior record for burglary and selling stolen goods, apparently told the homeowner that he was addicted to drugs. (Photo credit: Fox)

When a Phoenix homeowner returned home from work last Wednesday night he walked into a burglary in progress. When the homeowner walked into his house and came face to face with the burglar, he shot and killed him, according to a local Fox affiliate.

It was about 10 p.m. when the homeowner, whose name has not been released, noticed that there were lights on inside of his house when he pulled into the driveway. Feeling that something wasn’t quite right, he grabbed his handgun from his truck before going into the house. Once inside, 22-year-old Aaron Fisher emerged from a bedroom.

“I just unlocked my house there was a man there. He said he was on drugs and he was walking at me so anyway, I need paramedics. I need the police department. He’s still in my house!” the homeowner can be heard telling the 911 dispatcher in a chilling recording of the call.

The homeowner apparently shot Fisher then immediately ran to a neighbor’s house to call 911. The man told the dispatcher that he was watching the front door of his house, but never saw the suspect come out. When police arrived they found Fisher inside the home, unresponsive and suffering from a single gunshot wound. He was transported to a local hospital where he was pronounced dead a short time later.

The homeowner, who works as an unarmed security guard, remained very shaken up over the ordeal. On the audio of the 911 call, the man can be heard coming to terms with the fact that he just shot a man in his home.

The homeowner did not wish to appear on camera and only briefly talked with reporters.

The case will be turned over to the Maricopa County Attorney’s Office for review, but no charges are expected to be filed against the homeowner.