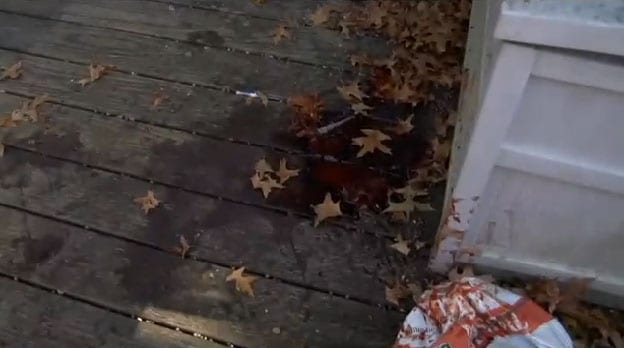 “He’s in the hospital fighting for his life, over stupid stuff,” the homeowner’s sister, Karen Brown said. (Photo credit: WOWK)

A 31-year-old man who was shot during a home invasion in Portsmouth, Ohio has died after his family decided to take him off of life support Monday afternoon, local media reports.

It was the second time over the weekend that the house had been broken into. The home belonged to Cindy Wellman, who died last month after battling breast cancer, and it had been empty since then. The first break-in was Saturday night and when Wellman’s sister, Karen Brown, discovered the home, it had been completely trashed.

“It hurts because she fought so hard to live, and this guy just came in, in such a short amount of time, and just tore it up,” Brown said.

Police told the family that there was a possibility that the suspect would return to the empty house again, so Wellman’s brother went to stay at the house on Sunday. However, when he walked into the house, he found Keith Richards breaking in through a back window.

“He yelled at [Richards], ‘Get away from the house, don’t break in,’ or something to that effect,” Brown said. “After he yelled at him to stop, [Richards] didn’t stop and he shot him.”

Richards suffered life-threatening wounds and was taken to the hospital where he remained on life support in critical condition. But his family decided Monday afternoon to take him off of life support and he died later that evening.

Before the news of Richards’ death, reporters spoke with Brown about the incident, who was obviously upset over the ordeal and concerned about her brother.

“To shoot a person, no matter what they were doing, they were wrong, but you don’t know what it does to a person when you have to shoot somebody,” Brown said. “He doesn’t deserve to die for what he did. If he dies from his injuries, he’s dying for something petty.”

And apparently that wasn’t Richards first home to break into either. After the weekend break-in, police searched his residence and found items that had recently been stolen from other homes in the area. Police believed that he may have been responsible for a string of recent burglaries in the area.

Brown also told reporters that there had been some sort of drug use in Wellman’s home during the break-in Saturday night.

No charges are expected to be filed against Brown’s brother, who police say acted in self-defense and is protected by the state’s Castle Doctrine Law.