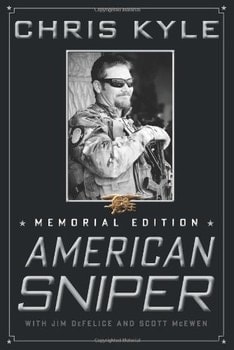 The other day I wrote an article explaining why I won’t read Piers Morgan’s new book “Shooting Straight: Guns, Gays, God, and George Clooney,” that highlights his crusade to gut the Second Amendment to the U.S. Constitution, among other topics.

My reason for not reading the book was simply that I don’t respect Piers Morgan as a journalist, nor do I find him to be entertaining in the least.

So, since I won’t be reading that book this week and I obviously need something to read (I try to average a book a week), what I will be checking out is American Sniper: Memorial Edition, a celebration of the life and legacy of fallen American hero Chris Kyle.

I haven’t received my copy yet, but from what I’ve read it’s got some new photographs as well as some new written perspectives from some of his close friends and family, including the author of the acclaimed book, “Lone Survivor: The Eyewitness Account of Operation Redwing and the Lost Heroes of SEAL Team 10,” Marcus Luttrell.

Before his tragic and untimely death, I had a chance to interview Chris, twice.  Once via email upon the release of the first edition of “American Sniper” and once again, earlier this year, at SHOT Show 2013 (see video below).  While I never got to know him on a personal level, I can say that from our limited interactions he was the genuine article.  He was a true hero.

Here’s an excerpt from our email exchange back in May of 2012:

I also had the privilege of interviewing his wife, Taya Kyle, who is also an undoubtedly awesome person.  We spoke back in June when she was helping to promote Chris’s last book, “American Gun: A History of the U.S. in Ten Firearms,” another fantastic read that I’d recommend.

In addition to talking about American Gun, we talked about the loss of Chris, serving our veterans and helping them to transition back to civilian life, her incredible speech at the NRA-ILA leadership forum and the biopic being made about Chris’ life, starring Bradley Cooper.  You can check that interview out here.

Here are the details on “American Sniper: Memorial Edition” as well as more on the Kyle family and their story.  I hope you check it out, if you haven’t already.

This commemorative memorial edition of Kyle’s bestselling memoir features the full text of American Sniper, plus remembrances by those whose lives he touched personally—including his wife, Taya; his parents, brother, and children; Marcus Luttrell and other fellow Navy SEALs; veterans and wounded warriors; lifelong friends; and many others.

In February 2013, Kyle’s legendary life was tragically cut short at a shooting range in Texas. The national outpouring of grief was overwhelming. Kyle’s memorial service at Cowboy’s Stadium in Dallas was attended by thousands, and sales of AMERICAN SNIPER exploded, becoming the first book to hit #1 simultaneously on both the hardcover and paperback New York Times bestseller lists. Kyle’s posthumous book, American Gun, reached #2 on the New York Times hardcover nonfiction list in June. The sheer amount of grief and mourning at the loss of this brave, strong-willed man is a testament to his significance as a hero and the massive effect he had on the men and women serving in the military as well as civilians both in America and abroad.

From 1999 to 2009, U.S. Navy SEAL Chris Kyle recorded the most career sniper kills in United States military history. Kyle earned legendary status among his fellow SEALs, Marines, and U.S. Army soldiers, whom he protected with deadly accuracy from rooftops and stealth positions. Gripping and unforgettable, Kyle’s masterful account of his extraordinary battlefield experiences ranks as one of the greatest war memoirs of all time.

A native Texan who learned to shoot on childhood hunting trips with his father, Kyle was a champion saddle-bronc rider prior to joining the Navy. After 9/11, he was thrust onto the front lines of the War on Terror, and soon found his calling as a world-class sniper who performed best under fire. He recorded a personal-record 2,100-yard kill shot outside Baghdad; in Fallujah, Kyle braved heavy fire to rescue a group of Marines trapped on a street; in Ramadi, he stared down insurgents with his pistol in close combat. Kyle talks honestly about the pain of war—of twice being shot, and experiencing the tragic deaths of two close friends.

AMERICAN SNIPER also honors Kyle’s fellow warriors. And in moving first-person accounts throughout, Kyle’s wife, Taya, speaks openly about the strains of war on their marriage and children, as well as on Chris.

Adrenaline-charged and deeply personal, AMERICAN SNIPER is a thrilling eyewitness account of service and sacrifice that only one man could tell.