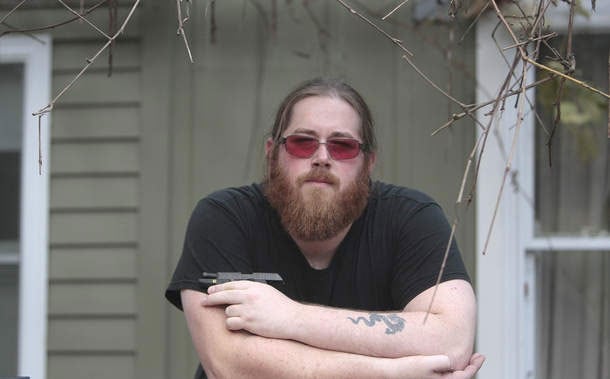 “This wasn’t an episode of a TV show. This was real. I just did what I had to do to make sure I survived,” Shannon “Bear” Cothran said after stopping a would-be robber while working the graveyard shift at a local Shell station. (Photo credit: The Telegraph)

When a would-be robber armed with a knife entered a Shell station early Monday morning and demanded money, the last thing he expected was that the clerk would pull out a handgun. The suspect swiftly changed his mind about wanting to rob the store and immediately left. No shots were fired, no cash was taken and nobody was injured, but hours later the clerk was notified that his position had been terminated because he had violated the company’s “no weapons” policy, The Telegraph reports.

Shannon “Bear” Cothran had worked at the gas station in Nashua, New Hampshire for more than 10 years. But the area’s more than 15 recent robberies, along with the fact that he works the graveyard shift, the most dangerous time according to many area business owners, prompted Cothran, who has a valid concealed carry permit, to take a chance on losing his job by toting his Ruger LCP .380 pistol to work each night.

And Monday morning he was glad that he had taken that chance.

It was about 3 a.m. when a heavily clothed man wearing a mask walked into the store and around the counter to wear Cothran was standing. He demanded cash and threatened him.

“He had the knife cocked back. It looked like he was going to stab me,” Cothran said. “I took several steps back, produced my sidearm, and informed him it was a bad idea and he didn’t want to do it, and he left.”

Following the incident, Cothran had to file a report with his employer, Nouria Energy. Hours later, Cothran was informed that he no longer had a job because he had violated the company’s “no weapons” policy, despite Cothran’s store manager and district manager both fighting to save his job.

While Cothran regrets that he lost his job, he respects the company’s decision and does not regret his actions. It was a risk he knew he was taking when he carried his firearm to work and one that he and his fiancé had discussed beforehand.

“I have a fiancé who I love very much, step-children I love, our first grandchild is due in December,” Cothran explained. “Given the situation, and the way the man who tried to rob me was acting, I truly believe if I didn’t defend myself I wasn’t going to be coming home to see my family,” he said, adding that he would rather be without a job than be in the hospital or a coffin.

Since the incident, Cothran said that the amount of support he’s received has been “overwhelming.” He’s received numerous phone calls and multiple emails and other communication from both friends and family and complete strangers alike. Multiple funds have been set up to raise money for Cothran’s family while he searches for another job, in addition to an “Offer Bear a Job” website designed to help Cothran quickly regain his employment status. 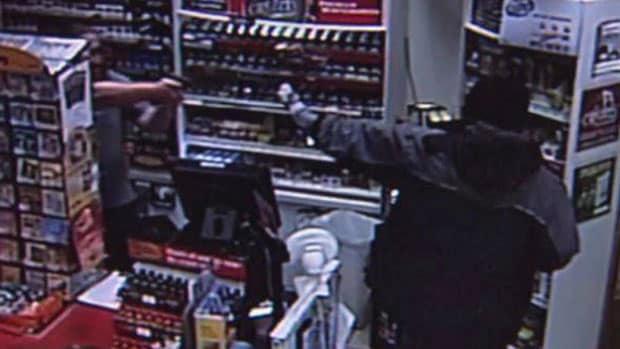 “He just said, alright, alright and backed off and made his way out the door,” Cothran recalled.

“What’s most shocking to me is the fact that it’s turned into a nationwide topic of conversation,” Cothran stated.

“It’s been completely overwhelming, mind blowing – all of it,” Cothran said. “Frankly, that this has become such a topic of conversation, and the fact that what I did is so remarkable tells me that what we really need in the world are more people to be willing to take a stand.”

Otherwise, he says, the bad guys will only continue to have the upper hand.

“They will keep winning, so long as people let them, and that’s the real issue here,” Cothran said.

“My one hope for all of this is that they rethink their policy about not permitting cashiers to protect themselves,” Cothran explained. “I realize it’s a liability for the company. I am sympathetic with them as far as that goes. But I’m hoping they rethink their policy of letting employees who are licensed to carry concealed weapons do so. I hope they look at this and realize there was no monetary loss to the store, no injuries and that’s because I am a reasonable human being and a responsible gun owner. They benefitted,” he said.

“You can’t take anything for granted these days – we have a growing cultural problem in this country that’s affecting things like crime. We have drug epidemics out of control, our economy is still suffering – people are still desperate, and desperate people do desperate things,” Cothran added.

“I believe we have two choices: be a victim or stand up and defend ourselves. I chose to be responsible for my own safety, and for that, I have no regrets,” he said.

However, Nouria Energy Corp. doesn’t take the same view on personal safety as Cothran does. While the company could not be reached for comment, they did offer the following statement regarding the incident.

At Nouria Energy, our employees are our most cherished assets. Their safety and the safety of our customers is priority number one.  It is with that goal in mind that we do not allow firearms in the workplace. We specifically train our employees on how to react during a robbery attempt to prevent the situation from escalating. Cashiers are instructed to give the intruder what they ask for in an attempt to resolve the conflict peacefully and as soon as possible.

Make no mistake: we care about the personal well-being of employees like Mr. Cothran, whose years of service are truly appreciated–not about the money in the cash register. So, we are especially grateful that this situation was resolved without injury.

We do respect the constitutional right to bear arms. However, we believe the best way to keep our employees and customers safe is to prohibit weapons in the workplace. Our training and policies are aligned with what is customary in the retail/conveniences store industries and is consistent with advice offered by security and police organizations.

Nashua Police Lieutenant Denis Linehan urges all of those who carry a firearm to be properly trained, but says that Cothran was well within his rights.

“The clerk acted appropriately. He did fear for his life. He was in close proximity to a deadly weapon,” Linehan said.

The entire incident was also caught on the store’s surveillance video, but police are still searching for the suspect, who’s described as a white or Hispanic male, between 6-feet and 6 foot, 2-inches tall, with a medium build. As he was running out of the store, the suspect also dropped a black-and-gray Coleman jacket with a red collar. Anyone with any information is urged to contact the Nashua police Criminal Investigation Division at 594-3500 or the Nashua Crimeline at 589-1665.

Special thanks to Guns.com fan Ron for submitting this story.