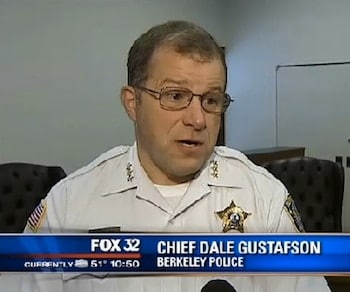 A 12-year-old, Chicago-area boy brought a gun to his middle school on Tuesday and shot a toilet in the men’s bathroom, perhaps accidentally.   He was arrested and charged as a juvenile with unlawful use of a weapon on school grounds.

The boy tucked a 9mm semiautomatic pistol into his waistband and brought it into the boy’s restroom.  While in lavatory, he took the gun out and it went off, the bullet striking a nearby toilet, authorities said.

“We don’t know where he got the gun, but it was a curiosity thing,” explained Berkeley Police Chief Dale Gustafson. “He had gone to the washroom with the weapon and the weapon discharged, which it’s looking more and more like an accidental discharge.”

Gustafson said the boy didn’t appear to be a threat to anyone at school.  He wasn’t seeking revenge and had no ill will toward classmates.

“He didn’t seem angry when he was asked, ‘Why did you bring the gun to school?’ He just said, ‘I don’t know,'” said the chief.

The police and the K-9 unit searched the student’s locker and surrounding area for additional weapons and ammunition.  None were found.

They responded to the scene after a faculty member called the department to alert them that the principal found a gun.

“Hi. This is MacArthur Middle School. The principal requested that we have an officer come over. We found a gun in the school on a student,” said the faculty member in the 911 call.

“We still have the student here.”

School District officials responded in a letter on Wednesday, assuring parents, staff and visitors that the boy never threatened anyone with the loaded firearm.

“The student’s conduct was a violation of law, and we are confident that local law enforcement will handle any criminal charges that are brought in an appropriate manner,” wrote Superintendent Eva Smith.

Smith added that the boy is suspended and will face possible expulsion for at least a year.

“The district does not tolerate weapons, or the threat of weapons, in our schools,” she wrote.

Meanwhile, parents were alarmed by the incident, many wondering how a young boy good gain access to a loaded firearm.

Police are still looking into how the boy not only obtained the firearm, which appears to be legal, but also how he got it into the school.

“There is concern about how he got it in, we’re still working on that,” Gustafson said.

The boy is currently in a juvenile detention center, awaiting his punishment.