Two Florida state convicts, both sentenced to life for separate shooting deaths, were released from prison based on falsified documents as part of an elaborate escape plan.

A vigorous manhunt has been initiated for 34-year-old Joseph Jenkins and 34-year-old Charles Walker, after authorities were notified of the paperwork snafu that allowed for their release, CNN News reported.

“These two individuals are out. They shouldn’t be, and we want to get them back in custody,” Orange County Sheriff’s Office spokesman Angelo Nieves told reporters. “This shouldn’t have happened, but it did, and our concern is to get these individuals back into custody”

To ensure that no other releases were based on fraudulent paperwork, a “vigorous and thorough review” will be conducted, Department of Corrections Secretary Michael Crews said.

Both sets of paperwork bore the signature of Judge Belvin Perry, who told CNN that he wasn’t surprised by the unfortunate mishap.

“People, particularly people with criminal minds, come up with ingenious ways to beat the system,” Perry said. “They have nothing but time on their hands to think of things.” 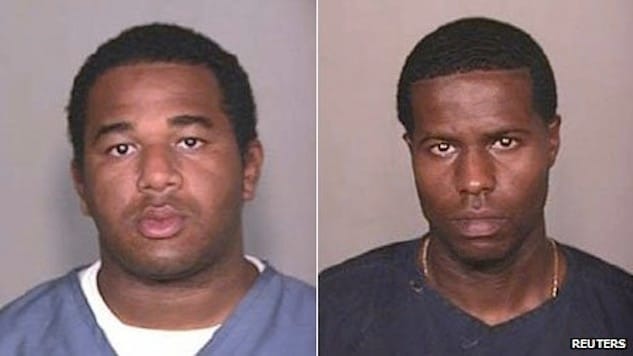 Jenkins and Walker, both sentenced to life in prison for separate shooting deaths, were released on falsified paperwork.

“Everything came the way it normally comes,” Florida Department of Corrections spokeswoman Misty Cash told local media. “Our department followed every protocol and did everything we are supposed to do.”

This isn’t the first time a hardened criminal was set free based on forged documents. Another inmate, Jeffrey Forbes, who was sentenced to life for the attempted murder of a law enforcement officer, is currently being prosecuted for a similar type of forgery after the detective who helped put the man behind bars discovered he was set to be released.

“It is now clear that the use of forged court documents to obtain release from prison is an ongoing threat with all law enforcement, prosecutors, judges, court clerks and prison officials must address and stop,” Ninth Circuit State Attorney Jeffrey L. Ashton said in a statement.

Orange County Sheriff’s Capt. Angelo Nieves offered the two criminals a bit of advice, saying, “They committed violent crimes. The best thing for them to do is to turn themselves in.”