A Chardon Township, Ohio, man was arrested after accidentally shooting his current wife during a fisticuffs with his ex-wife’s boyfriend.

Molchak and Schussler got into a physical altercation that left Molchak’s wife shot in the back.

A heated argument began while Tony Molchok and his wife, Shelley Molchok, were dropping off Tony’s special needs daughter at the residence of his ex-wife, according to KFOR.

Tony’s ex-wife’s boyfriend, Gary Schussler, came outside and began shouting with Tony. The verbal altercation quickly turned physical, and Molchok can be seen striking Schussler in the face. Shelley, meanwhile, captured video of the incident on her cellphone camera.

Schussler removed a revolver from his holster and yelled at Molchok, “You wanna fucking go there?”

Pistol in hand, Schussler marches towards Shelley, kicking the cellphone from her hand. A struggle between the two men ensued and at one point, Schussler dropped his gun. Molchok retrieved the weapon, saying, “I got the gun now!” 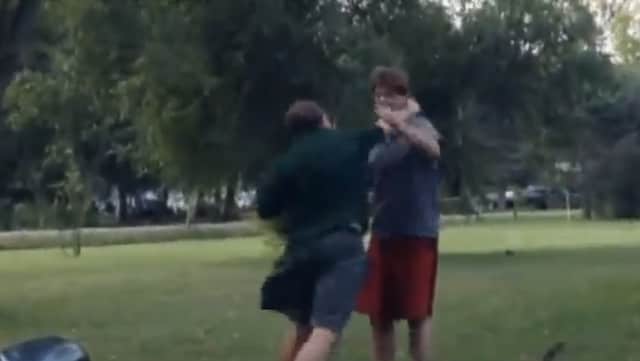 After being punched by Mulchak, Shcussler pulled a gun from his holster.

Just moments later a shot is heard on the video. Molchok negligently fire the revolver, shooting his wife in the back. Shelley was airlifted to MetroHealth Center to be treated for a collapsed lung.