Supply and demand. What's selling in the South?

Sometime after Christmas last year, when I got the message that shelves were empty, I went to pick up a review gun from Rebel Sporting Goods, in Keysville, Virginia.  Keysville is a tiny town in the middle of the state.  That the town even has a gun store is a genuine surprise, and it draws customers from a wide swath of the surrounding farmland.  But even here, so far from the politics of the gun debate, the shelves were picked clean.

They sold almost everything they had.  There were a few long guns left, and a couple of boxes of hunting ammunition.  But that was it.  Ten months later, the stock is back.  Even with ammo.  The only thing you can’t find is .22LR.  So is it business as usual in the sleepy mom-and-pop?

People love Glocks.  I was in the store recently when a shipment came in.  I think there were at least 20 that arrived.  The 9mm varieties are the most popular. How many do they sell?  I put the question to Meg Fears, the manager of Rebel Sporting Goods.   As many as they can get it, Fears says, they’ll sell.  After Glocks, it’s the Ruger pistols.  They’re modestly priced, and well made.  The Smith & Wesson pistols are popular, but still hard to come by. 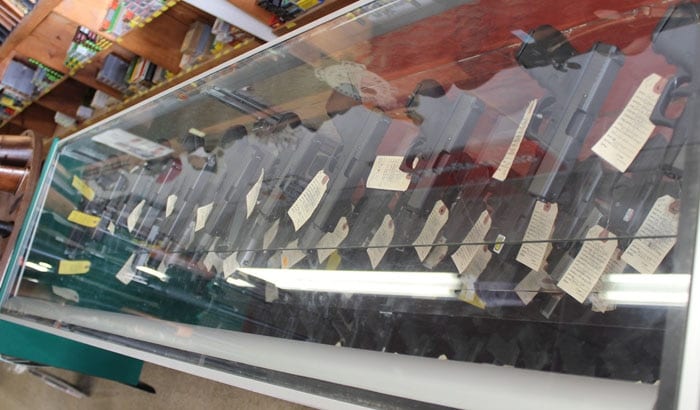 Rebel still isn’t seeing regular revolver shipments from Smith & Wesson, either.  Those are their top sellers.  Rebel is able to meet the demand for the Ruger pistols, but they can’t get enough Ruger revolvers.  Fears says the SP101s are in demand.  Anything in .38 or .357.

In the hunting calibers, Rebel sells a lot of Brownings and Remingtons.  Savage is in the top three, too.  The introduction of Ruger’s American Rifle has claimed a share of the market.  Rebels customers are serious about their whitetail hunts.  I’m a college professor, too, and I’ve learned not to schedule assignments around the opening of the season. 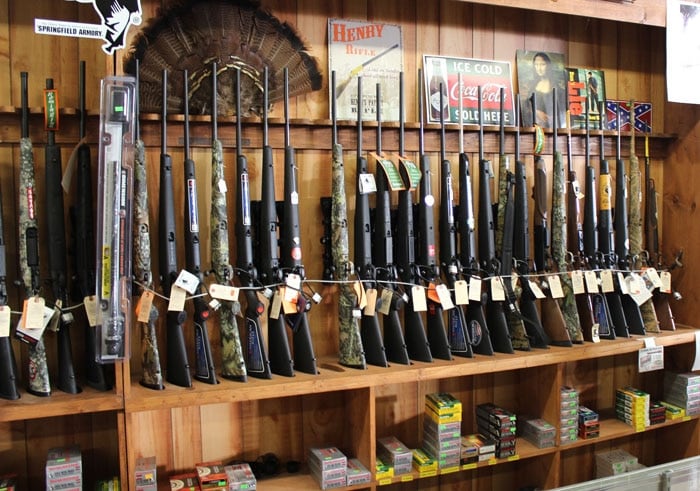 Fears knows that the customers buying rifles at Rebel are willing to pay for utilitarian quality.  To a point.  The same customers might buy a relatively inexpensive Ruger LC9 for concealed carry, and then pony up for a Remington 700 that they’ll shoot just a few times each year.

The customers want Winchesters, Fears says, but not the new ones.  The brand seems tainted.  They want old Winchesters.  Used guns never linger in the shop.  The Savages are growing in popularity for their reputation of accuracy.

The sporting shotguns are top sellers, too.  Browning and Remington.  Benelli is a distant third.  The Benelli guns are a harder sell, as the shop has to make special orders.  Fears says some customers who come into the shop wanting a Benelli will leave with something else that was in stock. 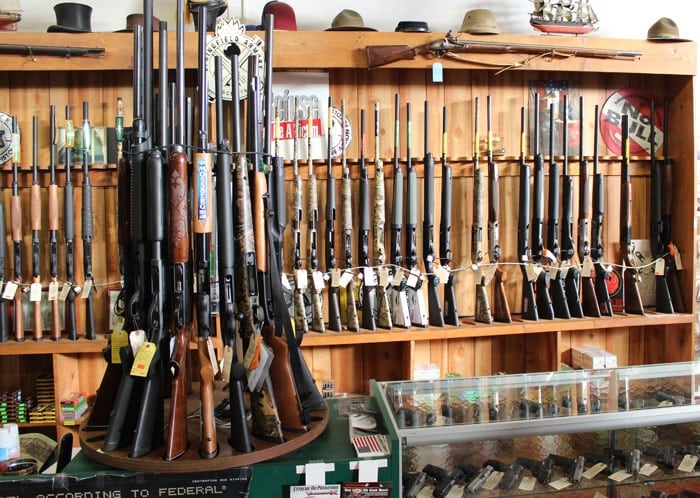 On the defensive side of the rack, it seems a toss up between Mossberg and Remington.

From December of last year until August, there were no black rifles at Rebel.  The rack had cleared.  Many of the long-guns, some of the shotguns, and all of the pistols with magazines that held ten or more rounds…gone.

But now the rack has a reasonable variety of new rifles.  Mostly .223s, but an overpriced AK, too.  The first sign of change was an Upper from Bushmaster that appeared in late August (it is still there).  Then a complete rifle arrived with little fanfare.  Though the shop has several Bushmasters in, the top seller is still a stripped down DPMS that sells for around $800.  After that, it is a more expensive Colt (which will also hold its resale value a bit better). 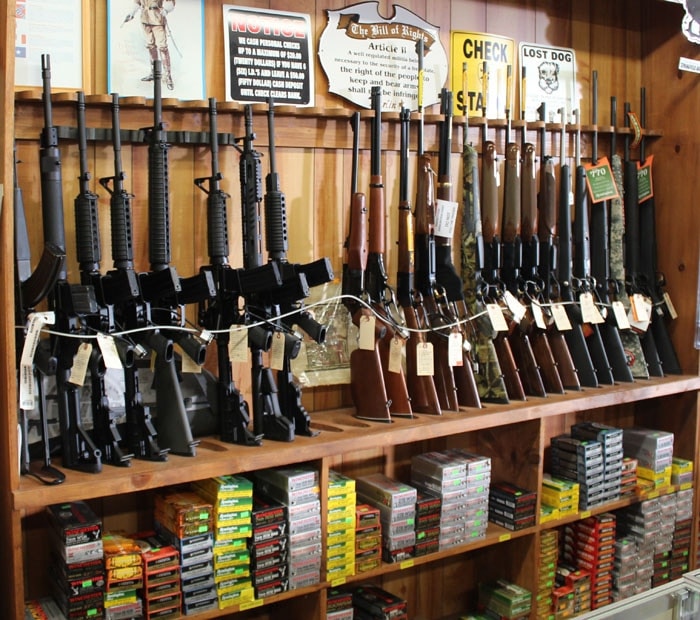 Though there are a limited selection of rifles on the rack, the shop has a more in the safe.  The rush for guns-that-might-be-banned is clearly over.  I’ve watched the stock on this shelf for the last few months.  While they’re selling, they aren’t selling like they did in December.  And now that hunting season is close at hand, the money is going to larger caliber bolt actions.

Is the drought over?  I think it is.  While there are still guns that customers want that aren’t in the shop, it isn’t that hard to make special orders.  The tactical rifles are overpriced.  I think the shop is still a bit optimistic that the guns will be in demand.

Even ammo is looking good.  You can find almost any caliber you want, even .223.  You don’t have the selection you did last year at this time, but your guns aren’t going to run dry.  And Rebel never raised the prices on their ammo.  As Fears said, Keysville is a small town.  “I can’t gouge these people.  It isn’t right.  Plus, I see them at church.  My kids go to school with their kids.  I see them in the grocery store.”

And that’s where it stands.  Right now, I’d go so far as to say if you hadn’t been in a gun store in a year, and had been living under a rock, you wouldn’t even notice the difference.  You may be curious about the prices on the AR-15s, and the lack of  bricks of .22LR sitting on the counter might make you think you were in an episode of the Twilight  Zone, but otherwise, it is business as usual.