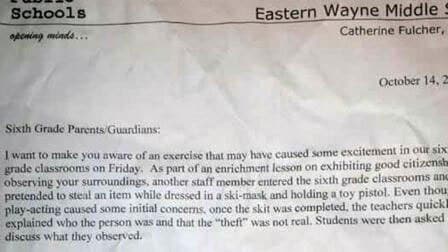 A Wayne County, North Carolina middle school is in a bit of hot water after it sent a fake gunman wearing a ski mask and wielding a toy pistol into classrooms full of sixth graders as part of an “enrichment exercise” on Friday, a local ABC affiliate reports.

Apparently the children had no previous knowledge of the exercise, but once they finished pissing themselves out of sheer terror that an actual gunman was in their school, they were told that it was a preplanned skit and the “gunman” was actually a school employee.

But it wasn’t only the kids who were unaware of the exercise either. Parents received an apology in the form of a letter following the incident. It read, in part, as follows.

As part of an enrichment lesson on exhibiting good citizenship and observing your surroundings, another staff member entered the sixth grade classrooms and pretended to steal an item while dressed in a ski-mask and holding a toy pistol. Even though the play-acting caused some initial concerns, once the skit was completed, the teachers quickly explained who the person was and that the ‘theft’ was not real.

In light of the recent school tragedies around the nation, I feel that this exercise could have been completed with greater sensitivity. Having said that, please be assured that all of our staff works diligently to promote a safe learning environment for our students.

Many parents are displeased with the exercise and the school has received numerous phone calls concerning the exercise. However, school officials agree that it wasn’t a very well thought out plan.

“It obviously did lack that sensitivity that was needed,” Public Information Officer with the Wayne County Public Schools, Ken Derksen told ABC. “In this situation, the exercise in its original intent was appropriate, but in how it was executed it obviously lacked judgment.”

There is an ongoing investigation surrounding the incident and the staff member who dressed up as the robber could face disciplinary action.