CCTV clearly shows a group of Kenyan soldiers enter the Westgate mall, passing over the bloodstained floors with their rifles at the ready, and then several moments later callously exit with their rifles slung and carrying bags full of merchandise, the Daily Mail reported.

The video comes as a shock to the Kenyans, who earlier praised the soldiers for their heroic efforts during the standoff with the al-Qaeda linked al Shabaab terrorist group, which left 67 dead and hundreds more inured.

Shortly after the battle began, Kenyan officials cut off all access to the mall, allowing only security forces and a handful of government personnel to enter. The mall, now desolate and devoid of shoppers, provided ample opportunity for the soldiers to wander about, collecting cellphones, alcohol and even emptying the registers of cash. Perhaps most shocking of all, these acts of thievery took place while the Islamist rebels were still in another section of the mall.

According to the Daily Mail, Kenyans are accustomed to corruption stemming from the political elite, but have long held the KDF to be an esteemed institution. 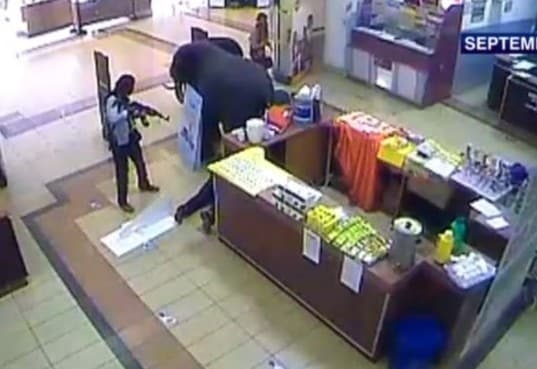 “The CCTV footage made me lost faith in the KDF, who we all strongly supported after they crushed Shabaab in Somalia,” said a Nairbi-based doctor who wished to remain anonymous. “Now, there is some sore of a cover-up taking place.”

Though Kenya’s security forces have denied any wrongdoing on their part, Emmanuel Chirchir, a spokesman for the Kenya Defense Forces, stated a news conference would be held Wednesday to sort out the looting allegations spurred from the discovery of the CCTV footage.