On the heels of the release of the MPAR 556 rifle, MasterPiece Arms is announcing a pistol based on the new design. Like the rifle, the pistol is chambered for 5.56 NATO/.223 Remington and uses widely-available AR-15 magazines.

The MPAR 556 is a piston-driven, stamped-steel firearm that resembles a handful of designs that have fallen into obscurity, specifically the AR-18 and its derivatives, such as the Leader T2 MK5. Despite a lack of commercial success these rifles proved to be extremely durable and dependable guns.

MasterPiece Arms’ MPAR 556 pistol is a logical next step in the development of the design. Because the rifle is piston-driven it does not have a buffer assembly like a standard AR. Instead the recoil assembly is contained entirely inside the upper receiver and handguard.

Making a pistol out of the MPAR 556 rifle is just a matter of removing the buttstock. MasterPiece Arms has attained an opinion letter from the ATF securing the MPAR 556 pistol’s position as a handgun, not an NFA-regulated Any Other Weapon (AOW). Of course, modifying the MPAR 556 pistol by adding a buttstock will make it a Short Barreled Rifle (SBR) and will require a tax stamp and paperwork. MasterPiece Arms will include a Magpul Angled Fore Grip just to make sure that users don’t attach a forward pistol grip, which would convert the pistol to an AOW, which is also NFA-regulated.

These types of firearms are growing increasingly popular and it makes a lot of sense for MasterPiece Arms to develop an MPAR pistol. Their pattern is well-suited for the purpose and doesn’t leave much wanting. 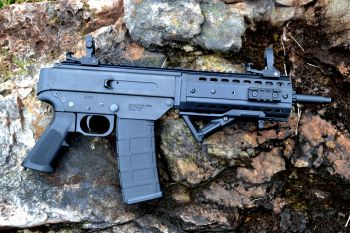 The MPAR 556 pistol shares a majority of the design features of the rifle minus the adjustable folding stock. It uses the same stamped-steel receivers for strength without weight, self-regulating gas piston system and non-reciprocating side charging handle. The charging handle doubles as a forward assist if necessary.

It has a modular, free-floating upper- and lower-railed aluminum handguard that accepts optional Picatinny rail segments on the sides for mounting accessories. This is in addition to having a full-length railed flattop upper.

The pistol comes standard with a threaded 11-inch barrel. In the demo the pistol doesn’t have a muzzle device (or thread protector) attached, which may not be the case for the final retail version. MasterPiece Arms developed a proprietary muzzle brake for the rifle that may produce an exaggerated downward push when combined with the muzzle blast from the shortened barrel and have removed it for this early look at the MPAR 556 pistol.

It may also be a cost-cutting measure. The MPAR 556 pistol has a lower MSRP than the rifle by $100 at $899. Of course, that’s a suggested price and we expect to see them sell closer to $700 in the real world, which puts them around the same price point as many other rifle-based pistols.

Like the rifle, the pistol does not come with optics, which is just as well as iron sights or red dot scopes and the like are fairly personal with many shooters having their own preferences.

These firearms are starting to become more mainstream, both with people who are looking to own a fun flame-throwing range gun as well as with those who want a lot of gun in a small package where space is at a premium, like in a vehicle. This is a solid entry by MasterPiece arms in this new and growing market and we look forward to handling one.

Not all the details are available yet, like weight and overall length, but MasterPiece Arms does have a product page for the MPAR 556 pistol. Check it out for more information.