Pick up a pink gun for Breast Cancer Awareness

October is Breast Cancer Awareness Month.  Close to 300,000 women in the United States are diagnosed with some form of breast cancer every year.  Close to 40,000 die form the disease annually. While there have been amazing advances in early detection, there is still no cure.

Every year about this time we bring you the lineup of companies that commit themselves to awareness and to the ongoing fight.  So where do you go if you want to help with the battle against breast cancer?

Let’s start with Stag.  In honor of Breast Cancer Awareness Month, Stag Arms is dressing up their fashionably black rifles with some pink accents.   Models 1, 1L, 2, 2L, 5, and 5L – as well as their upper halves – are available with carbine style thermoplastic pink hand guards and pink pistol grips.

“Many of our friends and families have been impacted by breast cancer and we want to support the National Breast Cancer Foundation in any way we can,” said Mark Malkowski, President of Stag Arms. “We are excited to expand the Go Pink for Breast Cancer campaign within our product line and hope to raise as much money as we can for breast cancer awareness.”

The cost for the bright furniture is $20.  Hand guards and grips will be installed onto the rifles. If you just want an upper, the pistol grip will be included with the shipment. All proceeds from the upgrades will be donated to the National Breast Cancer Foundation.

And you’ll be buying a Stag.  Can’t stress that enough.  We see a healthy number of ARs here at Guns.com, and Stag is still one of our favorites.  They make rock solid rifles and sell them at reasonable prices.

If you’re not an AR fan, perhaps you’d consider a pink AK.  Gives new meaning to the term pinko.  With a pink buttstock and a pink forend, the Lady AK from Century is certainly unique.

The Century Arms Lady AK. Clearly not just for ladies. 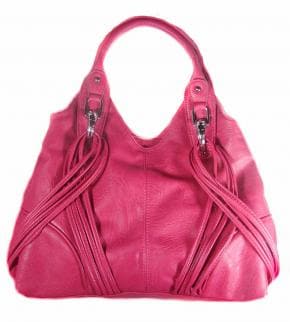 Pink off body carry from Gunhandbags.com

Maybe you’d rather keep your support for firearms and the fight against breast cancer a bit more subtle.  In that case, gunhandbags.com might have what you need.  This is, of course, assuming that you would consider carrying gear with a decidedly feminine flair.

During the month of October, the folks at gunhandbags.com will donate 10 percent of sales of any of their pink handbags to charity.  They offer a variety of styles, all geared toward off-body concealed carry.  Some are overtly pink.  Others use the color a bit more sparingly.  Anything pink, no matter how subtly the color is used, will qualify for the donation.

Supporting the fight against breast cancer is a no-brainer.  And I’m glad to see more options for men who want to demonstrate their commitment in a more public way.  ARs and AKs are by no means reserved for men, but shooting sports are still male-dominated.  Our wives and mothers and sisters and daughters all face this disease.  We have a vested interest in seeing it eradicated.

So give however you can.  Donate.  Buy from supporting retailers.  There are fewer gun-related breast cancer awareness items available this year than in the recent past, but remember that October is dedicated to awareness.  While we fight against the spread of cancer, we must also spread the word about just how large this problem is.  We’re a long way from the end, so everything helps.