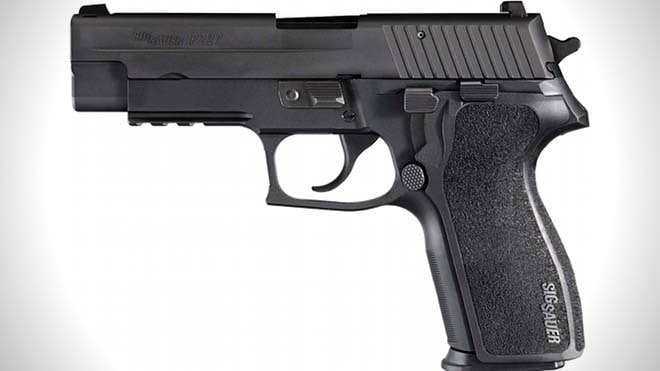 The Indiana State Police have announced that they are adopting the SIG Sauer P227 full-size .45 ACP handgun for service. This is a real feather in SIG’s cap as the P227 was announced late last year and has only been on the market for a few months.

The contract is for 1,400 pistols for the department with delivery expected to start in December later this year. It is quite the endorsement for the new update to the proven design.

“Based on the number of requests from agencies, we knew the P227 was going to be popular with law enforcement,” said SIG’s Gary Wade, VP of Law Enforcement, Government and Military Sales in a press release. “[The Indiana State Police’s] rigorous testing proved once again that SIG Sauer is the only choice when it comes to reliable, dependable duty weapons.”

“Reliability and ease of function are must haves in a law enforcement sidearm,” said Doug Carter, Superintendent of the Indiana State Police. “The P227 has both qualities and will serve our needs for many years.”

The P227 is SIG’s latest addition to their “classic” P-series pistols and their first double-stack .45 ACP handgun. Patterned off the P220 and P226, the pistol has a capacity of 10+1 rounds of the large-caliber cartridge with flush-fit magazines and 14+1 with extended factory magazines.

Officially announced at SHOT Show 2013, the SIG P227 expands the double-stack P22X family of handguns to include a .45 ACP. Previous pistols were chambered in 9mm, .40 S&W and .357 SIG. It is the most recent update to the 1975 design, the P220, which is also chambered for .45 ACP but uses a lower-capacity single-stack magazine.

Like many new SIG handguns, the P227 is fit with E2-series grips. They are not quite as slim as the 9mm and .40 S&W guns as the grip frame was enlarged to make room for the larger cartridges. Size-wise they’re about halfway between the new E2 grips and the original two-piece grips.

Everything else should be familiar to SIG users. They are double-action/single-action pistols with a frame-mounted decocker and currently offered in three models, the full-size “Nitron” standard P227 with a 4.4-inch barrel, a service-size “Carry” model with a shortened 3.8-inch barrel and a dehorned service-size “SAS” model for concealed-carry. The Nitron and Carry models have dust-cover rails where the SAS model does not.

While we don’t know what SIG is charging the Indiana State Police for their P227s we can say that they’re available on the commercial market, depending on their configuration, for around $800 to $1,000, which comparable to SIG’s other P-series pistols.

In our experience the P227 is a soft-shooting handgun that does justice to the classic SIGs. It does have a somewhat high bore axis but the solid ergonomics, grip texture and frontstrap serrations make it easy to control and fast.

With the endorsement of law enforcement, it’s safe to say that if you’re looking for a double-stack .45 ACP handgun you may want to look into the P227. It is a solid, if long-awaited successor to the original SIG P220.