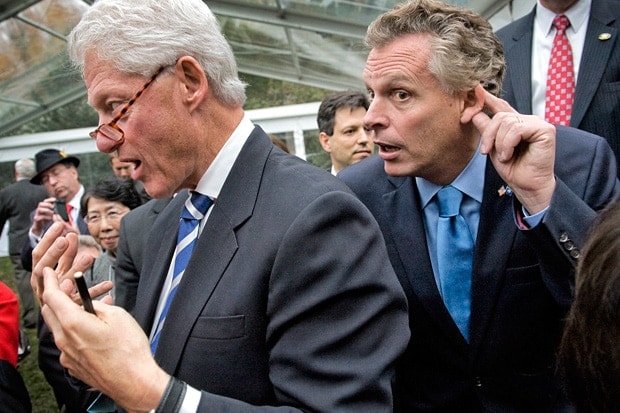 In addition to palling around with Bloomberg, McAuliffe has also received an endorsement from Bill-ary Clinton.

Gun owners in Old Dominion should be on guard or at least aware that New York City Mayor Michael Bloomberg is dumping $1.1 million on ads supporting Democratic candidate Terry McAuliffe in what is an apparent attempt to solidify his bid for governor with less than two weeks left to go in the race.

The money will come via Independence USA PAC, the political action committee Bloomberg created to foist his gun control agenda on the American people, and the commercials will air in the D.C. market starting Tuesday, Politico reported.

The election is Nov. 5 and McAuliffe has a substantial lead over Republican candidate Ken Cuccinelli, the state Attorney General, 50 percent to 33 percent, according to a recent Rasmussen poll.

Though he’s been deliberately vague about his official stance on gun control in the past, particularly with respect to his position on outlawing widely popular and commonly owned semiautomatic sporting rifles, after meeting with Bloomberg in August, McAuliffe’s team put together what they believe is a politically tolerable stance on gun control. For example, here’s what’s posted on his campaign website:

As Governor, Terry will support mainstream and majority supported gun control measures like universal background checks, limiting the size of magazines, and a return to the 1-gun-per-month rule. These measures respect Virginians’ right to bear arms while reducing gun violence.

Notably omitted is a ban on so-called ‘assault weapons.”  The reason?  It would irreparably damage his chances at winning the race.

Essentially, he is endorsing the “Colorado compromise,” as some journalists have been dubbing it. That is because with the exception of the one-gun-per-month rule, Colorado passed the same gun control laws following the mass shooting at Sandy Hook Elementary in Newtown, Connecticut.

The Cuccinelli campaign criticized the source of McAuliffe donors, many of which appear to be out-of-state, e.g. Planned Parenthood, National Education Association and San Francisco Billionaire Tom Steyer.

“McAuliffe’s liberal supporters like Steyer and now Mayor Bloomberg aren’t pumping millions into this race for a few laughs,” Cullen continued. “They’re doing so because they expect a return on their investment.”