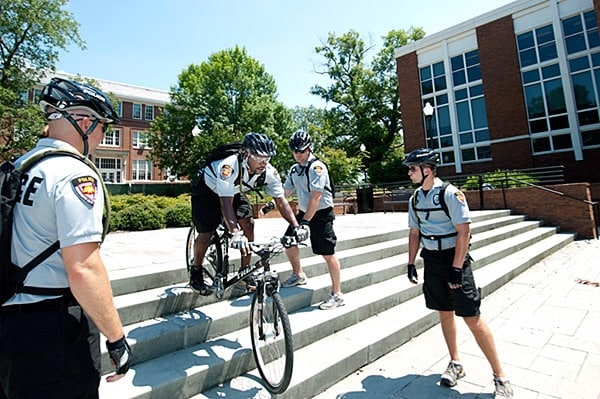 Some Mississippi cops messing around with their new bicycle.

Last Friday the Mississippi State Board of Education approved $1.57 million in funds to be used to help pay for 157 new police officers to be placed in schools around the state. The Legislature voted earlier this year to allot $7.5 million to match grants of up to $10,000 per school to add school resource officers to the districts that want them, the Clarion Ledger reported.

Amongst much debate over arming teachers and other school staff, the primary suggestion by the National Rifle Association following the shooting at Sandy Hook Elementary in Newtown, Conn. last year, Lt. Gov. Tate Reeves proposed the Mississippi Community Oriented Policing Services program, or MCOPS, which would allocate funds for additional armed guards in the state’s schools.

Currently, of the state’s 1,000 public schools, less than 400 have their own security on campus.

“I’m proud we can place 157 additional trained officers in Mississippi schools to protect the precious lives of children,” Reeves stated. “MCOPS is an example of a state and local community partnership that can provide a service citizens want, and I look forward to seeing even more schools take advantage of the program in the future.”

Additionally, the program provides incentives for law enforcement agencies to work alongside schools and to use community policing to help reduce violence and improve school safety.

In at least one of the state’s school districts, the approved funding means that each individual school in the district will now have its own officer, instead of having to share officers between multiple schools, as it has currently been. Additionally, in the past, officers have been provided through arrangements made with the sheriff’s office or local police department, but now schools have the option of seeking their own armed guards.

“Through this grant we will be able to provide coverage on all of our campuses with a dedicated officer to that campus, thus increasing the security for our students and employees,” The Hinds County School District, which was approved for 10 additional SRO positions for the 6,600-student district, Superintendent Stephen Handley said.

But Clinton Police Chief Mike Warren explained that the idea of having police officers on school campuses isn’t quite as straightforward as one might think, while former Mississippi Association of Educators President Kevin Gilbert feels that the money could be more effective if spent on other programs.

“SROs are not expected to merely be armed security guards,” Warren said in a statement. “Officers are specifically screened for intelligence, ability to teach subjects within their area of expertise and ability to interact with students.”

Gilbert claims, “The best way to curb violence is through prevention. We need commonsense solutions,” pointing out that the money could be better spent on additional teachers, counselors and prevention programs.

Gilbert argues that the officers aren’t trained on the day-to-day issues the schools face or how to deal with the students who may be facing emotional or mental problems. Additionally, Gilbert claims that having the armed guards in schools do very little to contribute to overall safety, but instead the SROs end up dealing with other less important school issues, such as dress code violations.