Share
Pennsylvania State Trooper Timothy Strohmeyer was recently awarded one of the highest honors when he was named International Police Officer of the Year for his heroic actions last December when he saved his partner from near certain death.

On the morning of Dec. 21, 2012, the town of Frankstown Township, Pennsylvania, woke up to tragedy and chaos. Jeffrey Lee Michael, an unemployed former trucker, walked into a local church, gunning down a woman as she put up Christmas decorations in preparation for a children’s party. Continuing on his rampage, Michael killed two others away from the church, ABC News reported. 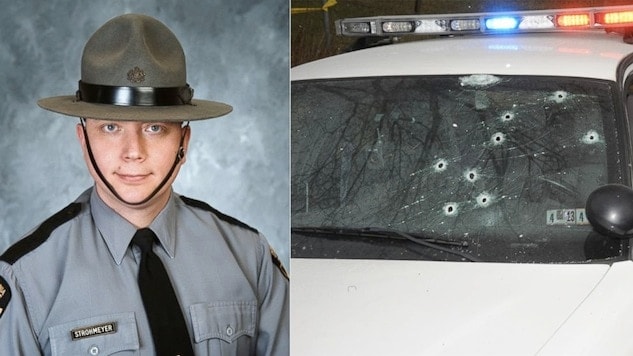 Pennsylvania State Trooper Timothy Strohmeyer’s heroic actions landed him one of the most prestigious awards.

Strohmeyer and Trooper David Navaruk rushed to the scene, hurtling down the road in their cruisers when they noticed Michael in his pick-up truck driving purposefully towards them. As Michael approached the troopers he unleashed a barrage of bullets into both patrol cars, sending shards of broken glass into Navaruk’s face, according to Pennsylvania State Police.

Even still, both troopers brought their vehicles around and gave chase to Michael. As they pursued the suspect, another trooper, Kevin Campbell, approached in his vehicle from the opposite direction. Having spotted the trooper, Michael “accelerated his truck and intentionally rammed Campbell’s patrol car head-on,” thereby trapping the trooper inside, according to state police.

Strohmeyer, knowing Campbell was unable to escape and completely exposed, took decisive action. Taking a page from the suspect’s book, the trooper used his patrol car as a battering ram. The dashcam video shows Strohmeyer smash into the back of Michael’s truck as his windshield fractures and spiderwebs.

His plan was a success. Campbell was now safe, but Michael, now enraged, put all his attention on Strohmeyer. The gunman marched towards Strohmeyer unleashing eight rounds from his pistol and striking the trooper several times in the chest and left wrist. 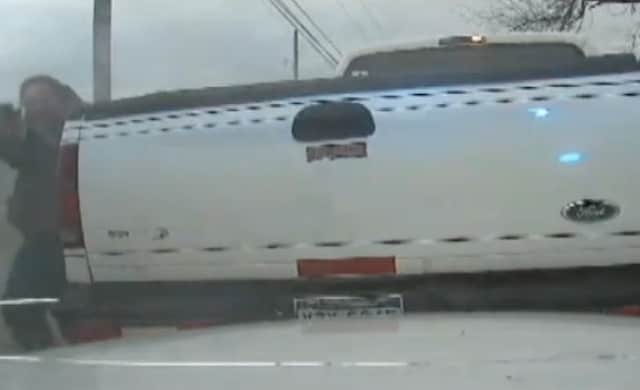 The suspect fired eight times at Strohmeyer, striking the trooper several times in the chest and left wrist.

Strohmeyer was wearing a bulletproof vest and survived the ordeal. Michael, on the other hand, fell to the ground, dead from the troopers’ returning gunfire.

Ten months after the incident took place Strohmeyer was honored for his heroic and selfless actions during the performance of his duties as a law enforcement officer. At a conference in Philadelphia, the International Association of Chiefs of Police named the trooper the International Police Officer of the Year.

“His courageous actions in the line of fire last December – when he placed his own life at great risk in order to save the lives of those around him – exemplified the very best of what it means to be a public servant,” Attorney General Eric Holder said at the conference. “He is a hero in the truest sense of the word. And it’s an honor to join the IACP in celebrating such a prestigious and well-deserved [honor].”