'Large amounts of weapons' may make you a gov't target, Feds say (VIDEO) 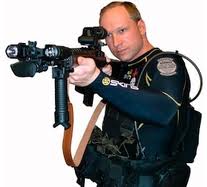 How many firearms and firearm-related accessories do you own? How much ammo do you have stockpiled?

It’s okay, you don’t really have to tell me, but if it’s a “large amount,” you may find yourself in the crosshairs of the Department of Homeland Security and the FBI.

According to a joint ‘Suspicious Activity Reporting’ (SAR) bulletin issued by both agencies in August, intended to be disseminated to police, fire, EMS and security personnel, possession of “large amounts of weapons, ammunition, explosives, accelerants or explosive precursor chemicals could indicate pre-operational terrorist attack planning or criminal activity.”

As an example, the bulletin pointed to Anders Behring Breivik, the Norway rampage killer who admitted to killing 77 people in shooting and bombing attacks in July 2012. The bulletin stated that Anders “stockpiled approximately 12,000 pounds of precursors, weapons and armor and hid them underground in remote, wooded locations.”

Though, the bulletin makes clear that one doesn’t need to store the arms in a hidden bunker or a remote location, but that they can be “cached” in one’s “home, storage facility or vehicle,” and that the weapons can include anything from “rifles, shotguns, pistols” to “military grade weapons.”

All of this raises questions about how does one define suspicious activity as it relates to weapons possession and when does one report it to the authorities?

Well, the rubric the bulletin gives is that when one (law enforcement officer, fireman, EMS tech or security guard) discovers “unusual amounts of weapons or explosives that would arouse suspicion in a reasonable person” he/she should alert the government.

There are other indicators as well, such as:

Possession of explosives such as IEDs (including rockets, grenades, pipe bombs and other homemade explosives) and other destructive devices.

Dangerous objects artfully concealed at security checkpoints or in areas where weapons are not allowed.

However, the bulletin cautions against reporting “constitutional activity” unless the circumstances “support the source agency’s suspicion that the behavior observed is not innocent, but rather reasonably indicative of criminal activity associated with terrorism, including evidence of pre-operational planning related to terrorism.”

As noted by PublicIntelligence.net, the bulletin is part of a DHS-FBI series describing activities “reasonably indicative of criminal activity associated with terrorism,” to police officers, first responders and security personnel.

The criteria for the bulletin comes from the 2009 Information Sharing Environment (ISE) Functional Standard for Suspicious Activity Reporting, which is part of the Nationwide Suspicious Activity Reporting Initiative (NSI), a program (the “See something, say something campaign”) that establishes a standardized process whereby information can be shared among agencies to help detect and prevent terrorism-related criminal activity (see SAR initiative promo trailer below).

At the end of the day, this whole bulletin comes down to what one considers to be “reasonable” as opposed to what is constitutional. It’s a judgment call on behalf of the public employee.

We have a right to keep and bear arms for self-defense within our homes. But if a first responder or a law enforcement officer believes that you have an unreasonable quantity of firearms, he/she she can report you to the DHS/FBI, which will then (presumably) begin to monitor your activity (not as if the NSA isn’t already).

In the majority of instances, common sense and reason will prevail, the officer or first responder will be able to adequately assess the situation, but there’s little doubt that from time to time law-abiding gun owners are going to find government agents knocking on their front door (that is, if they’re polite enough to knock) demanding to examine their firearms.  It’s inevitable, especially with the ongoing movement to demonize certain commonly owned rifles like the AR-15 (“It’s unreasonable for anyone to own an AR-15.  This person must be a Terrorist!”).