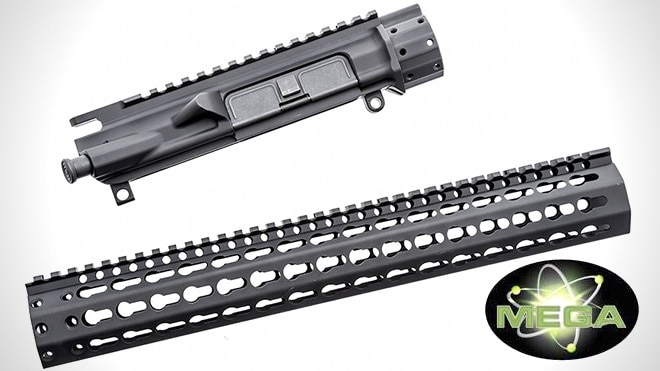 Mega Arms is one of the largest manufacturers of AR-15 and AR-10 rifles in the U.S. Not only do they manufacture parts for themselves but they’re also a major supplier to other companies who build firearms using Mega parts.

For some time now Mega Arms has been manufacturing the MKM MA-TEN AR-10 upper receiver, a solid redesign of the standard upper. Now they’re gearing to launch a version of the MA-TEN for AR-15s.

It’s surprising they haven’t started making these uppers earlier. The AR-15 market is one of the largest and fiercest in the gun world; people can’t get enough options when it comes to their black rifles.

What makes the MKM uppers stand out is the use of a non-conventional barrel and handguard interface. The proprietary upper receiver has extensions that support more of the barrel, making it inherently more stable and well-known for accuracy. The upper receiver extension also serves as an extended handguard mount, which lends the whole upper assembly a huge amount of stability.

With the MKM design the handguard is guaranteed to to rotate without depending on locking tabs or other work-arounds for installing a free-floating handguard to a AR upper.

The construction is solid. Mega Arms uses 7075-T6 aluminum for their uppers, which offers an increased level of strength and durability over the more commonly-used 6061-T6 alloy.

The handguard is also a new design that sports Keymod slots instead of fixed rails or proprietary rail mounting systems. Keymod, by Vltor, is an open-source standard for mounting accessories. It’s increasingly popular for its ease of use, flexibility and lightweight profile.

Mega is expected to manufacture these uppers in four configurations of varying lengths. They will offer the 5.56 MKM with seven-, nine-, 12- and 14-inch handguards. They will come in priced at $400, $431, $462 and $485, respectively. The prices aren’t bad at all considering they include an upper and a handguard; it would be easy to spend as much or more and not get a pair designed to fit together with this degree of precision.

Included will be a pre-installed ejection port cover and a section of Keymod rail. Each upper receiver is laser-engraved and fully T-marked.

Other details like upper receiver weight and release dates haven’t been released yet. But we can be sure that when they do become available Mega Arms will update their website. For now, these teaser photos over at Gear Scout will have to be enough.