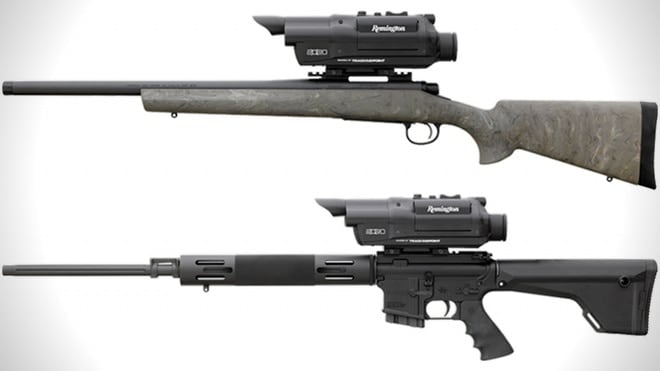 Remington recently announced a new series of rifles featuring their 2020 Digital Optic System, or DOS, a mainstream variant of the TrackingPoint Precision Guided Rifle. Working with TrackingPoint, Remington has developed a smart scope system “for the masses.”

“The Remington 2020 System is the next significant advancement in firearms technology,” said Scott Blackwell, Remington’s president in a press release. “Remington has been a leading innovation provider to hunters and shooters since 1816. Through our partnership with TrackingPoint we are now leveraging a powerful R&D network and technology engine allowing Remington to continue to enhance our consumer’s experience. The end result: we have created the ultimate hunting and shooting confidence builder that allows the user to share their experience from start to finish.”

The Remington 2020 DOS uses technology similar to what’s used with TrackingPoint rifles, in that the scope uses a wide spread of sensors to predict where any shots fired will strike, no matter what the gun’s position is or how far away the target is — at least out to 500 yards.

Unlike TrackingPoints guns, which have an electronic trigger that can be set only fire when the rifle is aimed perfectly, 2020 guns have conventional triggers and the smart scope uses a visual cue to let the shooter know when they are on-target with the shooter deciding when to pull the trigger.

In a lot of ways, Remington 2020 Digital Optic System-equipped rifles are scaled-down versions of TrackingPoint’s rifles. They’re chambered for smaller calibers, .30-06 Springfield, .308 Winchester and .223 Remington and not rated for the same distances as the PGRs.

The rifles are more conventional as well. TrackingPoint’s PGRs are built on custom hand-built gun where Remington has picked several “off the shelf” rifles for pairing 2020 Digital Optic Systems. Remington hand-selects them for accuracy but they are otherwise standard rifles.

But apart from being a somewhat simpler, shorter-range version of the TrackingPoint system, the Remington 2020 is practically identical to the arch-smart scope in most other ways.

“Looking through the Remington 2020 Digital Optic System, the shooter is presented with a Heads-Up Display (HUD) that overlays the information about the ammunition, environment and shot orientation that effect accuracy to the field of view before them,” explained Remington. “The advanced internal ballistic computer immediately generates a firing solution based on a far greater number of inputs and factors that affect the bullet’s flight than other ballistic calculators or tables. The shooter then simply adjusts their point of aim to bring the ballistically corrected reticle on target and take the shot. Even on targets moving up to 10 mph.”

The system not only replicates many of the ballistics-mapping capabilities because it too uses a digital scope and camera instead of traditional glass it shares the same video-streaming capabilities.

“The system can also broadcast a Wi-Fi signal allowing others to see a streaming live video feed from the HUD via a smartphone — Apple iOS or Andriod — app. For the first time, another person can share what the shooter is seeing and doing wirelessly for more effective coaching, mentoring or guiding. From the time a tag is placed until a preset time after the shot is taken, this stream can also be recorded, with audio, to internal memory for later downloading and sharing.”

The three models are as follows:

Yes, priced at over $5,000 these guns are still for a narrow slice of the shooting world. But Remington’s slice is many times larger than TrackingPoint’s and more attainable for those interested, whether they’re shooting for sport or shooting for work.

For anyone who can’t afford to miss these rifles’ value is clear. For all the product details head over to the 2020 product page.