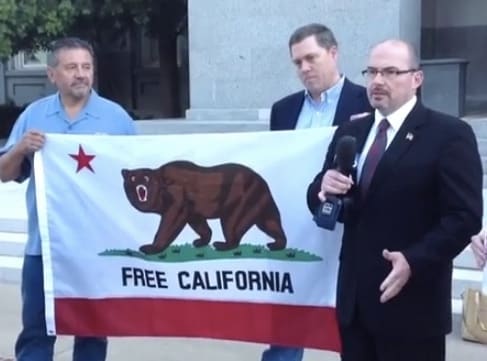 California gun owners are making a push to get back at those lawmakers who sold their Second Amendment rights down the river by endorsing various gun control measures that Gov. Jerry Brown signed into law earlier this month.

At a rally on Thursday, advocates from Gun Owners of California gathered on the steps of the state Capitol building to announce a recall effort against vulnerable pro-gun politicians.

“Every single assemblyman and state senator swore an oath to uphold and defend the Constitution,” Assemblyman Tim Donnelly (R-Twin Peaks), who is helping to lead the call to action, told the Sacramento Bee. “And when they violate that oath by trying to erase the Second Amendment, then I think we have a duty” to “remove that threat.”

The impetus to hold lawmakers accountable comes on the heels of a successful recall campaign in Colorado where two Colorado state senators were ousted for supporting laws that require background checks for private transfers or gun sales, including those made over the Internet and at gun shows, and a ban magazines that hold more than 15 rounds of ammunition.

The leader of the Colorado grassroots recall movement Tim Knight attended the event along with Sam Paredes of Gun Owners of California. Both men spoke about the fight ahead.

“Since the governor’s action in signing the bills and vetoing bills, we have been inundated with calls and emails, communications with people all over the state of California asking us, what are we going to do about this?” Paredes said, adding that “the recall is one way to send a message: if you continue to do this, we’re going to continue to fight.”

According to Jennifer Kerns, a Donnelly aid, the recall movement will target the following lawmakers: Sens. Norma Torres and Ben Hueso, Assemblywomen Lorena Gonzalez, Sharon Quirk-Silva and Speaker John A. Pérez, each of whom supported the gun control measures Brown signed into law. Those bills include:

– AB48 makes it illegal to purchase the parts necessary to convert guns into assault-style weapons and requires people selling or transferring ammunition to record the identification of the buyer and report the sale to the state Department of Justice.

– SB683 will require people who buy rifles and shotguns to first pass a written firearm safety test and obtain a certificate, just like the buyers of handguns must.

– AB500 allows the Department of Justice to extend the waiting time to purchase a firearm if a background check can’t be completed within 10 days.

– AB170 requires assault weapon permits to be issued to individuals, rather than to partnerships, corporations or other groups.

– AB1131 extends from six months to five years the period during which a person who threatens violence is prohibited from purchasing a firearm.

– SB127 requires licensed psychotherapists to disclose to local law enforcement within 24 hours the identity of a person who threatens violence against a reasonably identifiable person.

Meanwhile, California Democratic Party spokesman Tenoch Flores said that the recall movement is nothing more than a publicity stunt.

“This initiative is designed with one purpose in mind and it isn’t to recall any members of the legislature,” Flores said. “It’s a ploy to boost Tim Donnelly’s upstart campaign for governor.”