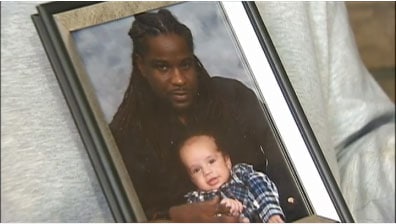 Curtis Edmonds left behind at least one other child – a 1-year-old. (Photo credit: WPXI)

An argument involving a love triangle ended with the shooting death of one man Sunday morning in Brighton Heights, Pennsylvania. One party is calling it self defense while family of the deceased is claiming murder.

It was about 3 o’clock in the morning when Curtis Edmonds, 37, showed up at his ex-girlfriend’s house. According to a report by Trib Live, Pittsburgh police spokeswoman Diane Richard said that Edmonds had repeatedly called the woman and attempted to come to the residence even though she had told him not to.

When Edmonds arrived early Sunday, the woman came out on the porch to confront him. Edmonds, who was armed with a pistol, then forced his way into the home by punching the woman in the face and hitting her with the gun.

Once inside, Edmonds found the woman’s current boyfriend standing at the top of the staircase. According to him, Edmonds initially aimed the gun at him, then lowered it, but when he aimed it at the man for a second time, the current boyfriend then pulled out his own pistol and shot Edmonds multiple times in the torso.

When police arrived minutes later, the current boyfriend was outside of the home. Edmonds was lying in the hallway unresponsive with the gun still in his hand. Edmonds died from the gunshot wounds.

Police held the current boyfriend for questioning, but he was released after he, the woman and the woman’s two children, who witnessed the incident, all gave an account of what transpired.

Edmonds was the father of the two children, ages 10 and 15. They were unharmed during the ordeal.

Neighbor Tonika Floyd told reporters that she never expected anything like that to happen on her street.

“I was very shocked and surprised to hear that because they are a nice family,” she said and added, “I feel really bad.”

The names of the woman and her current boyfriend have not been released, but police say that he does have a valid permit to carry the firearm.

The investigation is ongoing, but the initial indication is that the man acted in self-defense when he shot Edmonds.

However, Edmonds’ mother doesn’t agree with that account and she believes that her son was murdered.

“I don’t understand it. I just want justice for my baby. He was my only baby, and they took him away from me. He didn’t deserve it,” Edmonds’ mother, Katherine Green told reporters.

Green claims that her son was only at the woman’s house to see his children.

“He had his life together and he was doing good. He didn’t deserve this,” Green said, also claiming that the woman’s story of what happened that night just doesn’t add up.

There are no records of the woman ever obtaining any sort of protective order against Edmonds, who had a prior criminal record, including felony counts.

No charges have been filed against the woman or her current boyfriend.