Heizer Defense has been developing a “pocket shotgun” PS1 .410-bore single-shot derringer for several months, refining the process and testing the design by shooting thousands and thousands of shells through them.

Heizer is prepping it for commercial release soon, and there’s no doubting that the pistol will be popular. Chambered for .410 shotshells the pistol can also fire .45 Colt loads.

Even with just a single round’s capacity, the incredibly thin, compact and lightweight package will draw people looking for an extra-small backup gun. The design is so incredibly thin and light that it can easily be concealed no matter what wardrobe a person has.

The PS1 is one of two Heizer Defense derringers. The other pistol is a two-shot .45 ACP, the PS2. Both pistols feature all-steel design to reduce recoil. While .410 shot is light and easy to control, with guns this small every ounce works in the shooters favor, especially with .45 ACP. Heizer Defense is also working on titanium-framed models, which are slightly lighter than steel (and obviously a lot stronger, not to mention rustproof) but not as light as aluminum.

The design shares more than a passing resemblance to the DoubleTap double-barrel derringers chambered for .45 ACP and 9mm — Heizer Defense and DoubleTap were once the same company; they have since parted ways but not intents. Both companies are making derringers for the 21st century. 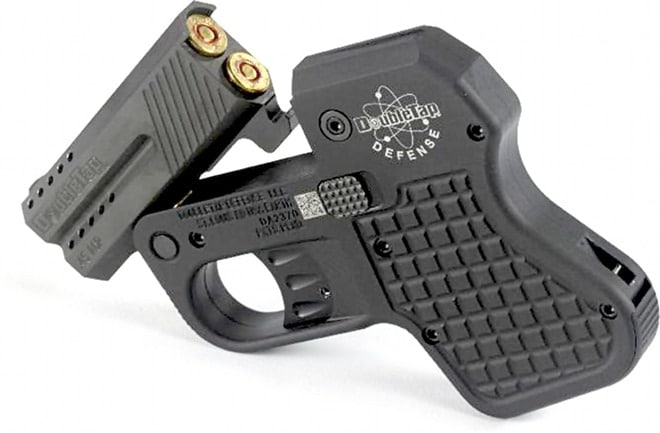 Recognizing the market appeal of .410-bore pistols, DoubleTap is following in Heizer’s footsteps and developing a .410 derringer of their own. Unlike the Heizer “pocket shotgun,” the DoubleTap model will have two barrels for two shots.

Like the other DoubleTap pistols, the .410/.45 pistols will be available with either aluminum or titanium frames. The aluminum models weigh just 13 ounces and in .45 have developed a “kill on one end, maim on the other” reputation. Titanium frames weigh 15 ounces but cost more.

With the lower recoil .410 offers while still being capable of firing .45 Colt for a better self-defense cartridge, it’s likely that DoubleTap will have no problems finding buyers for their latest derringer.

Additionally, DoubleTap is working on a .40 S&W derringer. It, too, will have two shots and be available in aluminum or titanium. Like the other designs it features a compartment for two more cartridges loaded in a stripper clip.

The third chambering may be a real hit with people who want more than two rounds of 9mm at their disposal but know that two of .45 is difficult to handle with this type of firearm.

For more details head over to the Heizer Defense and DoubleTap websites.

What do you think of .410/.45 Colt derringers? Range toy, self-defense tool or ultralight survival gun?