Believe it or not, Second Amendment supporters in Colorado might ultimately reveal that the phrase a woman’s right to choose now has more of a gun connotation.

Last month, grassroots organizations like “We Are Created Equal” (a women’s rights group in Colorado Springs) banded together with other pro-gun Coloradans to start ousting anti-gun state lawmakers. The first two legislators to be tossed from office were Senate President John Morse (D) and state Sen. Angela Giron (D).

While the historic recall marked an important victory for Second Amendment supporters, it also exposed a dark political irony regarding women’s rights.

Supporters of Morse and Giron from the political-action group “We Can Do Better, Colorado” attempted to shift the focus of the recall from a bonafide attack on the right to choose how Colorado women (and men) defend themselves and their families to a politically orchestrated and fictional war on women’s reproductive rights.

“We Can Do Better Colorado” tried to bury the fact that Morse and Giron had infringed on every woman’s ability to defend herself from rapist, murderers and domestic abusers by painting their GOP opponents, Bernie Herpin and George Rivera, as misogynistic males plotting to wave goodbye to women’s birth control options. Why would Herpin and Rivera do this? Obviously, they support the Second Amendment, but worse (according to Morse and Giron supporters) they also believe in protecting unborn infants. Fortunately, Colorado women were not buying the nonsense.

Still, this historic victory came as a surprise to many because Morse and Giron ominously overshadowed the challengers in name recognition. The two incumbents also relished a 6 to 1 spending advantage thanks to their national anti-gun allies (like billionaire New York City Mayor Michael Bloomberg (D)) contributing bags of money to keep the gun grabbers in office.

But none of those obstacles were enough to obstruct Colorado women’s support for their right to choose how they protect themselves. And now, only a few weeks removed from the first monumental victory, pro-choice supporters of the Second Amendment variety have zeroed in on yet another gun-grabbing colleague of Morse and Giron’s, state Sen. Evie Hudak (D).

Hudak made headlines herself last March by insulting a rape victim during a hearing for what are now Colorado’s strict gun-control laws. 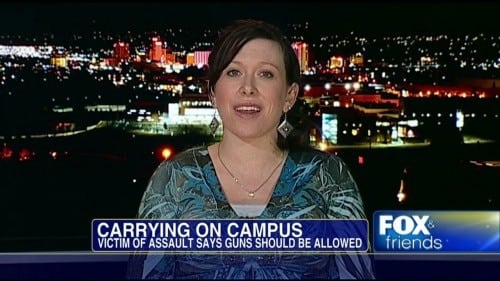 When the victim Amanda Collins was attacked, she was only disarmed because a gun- free zone on the college campus had stripped her of her right to choose whether she carried her handgun. Collins possesses a concealed carry permit. But Hudak told Collins that “chances are that if you had had a gun, then [your rapist] would have been able to get that from you and possibly use it against you.”

As repulsive as that remark is, the senator did not stop there. Hudak also asserted that the gun statistics were on her side. (Consequently, Hudak must have felt compelled to support the effort to protect women from their naive innocence by denying them their right to choose whether they arm themselves because Hudak does in fact support that.)

Nevertheless, the senator misrepresented her statistics.  FBI reports show that 2.1 million Americans use firearms in self defense every year. Conversely, criminals use firearms about 579,000 times per year, and the majority of those crimes are perpetrated by repeat offenders.

Although she shamelessly skewed her facts while simultaneously insulting a rape victim for wanting the right to protect herself with a gun, Hudak now believes she herself is a victim of “a small group … seeking to undo the will of voters.”

But according to the group Recall Hudak, “[The senator] has infringed upon our constitutional right to keep and bear arms. She has voted to make all citizens less safe and to drive hundreds of jobs from Colorado.”

A Rasmussen poll released earlier this year reveals that 65 percent of the country believes the Second Amendment ensures freedom.  Women gun owners have nearly doubled over the last seven years and they have clearly joined the fight to defend their right to choose whether they bear arms (or not).  That number probably does not help to assuage any gun-grabbing politician’s queasy feelings.

Clearly, the effort to recall Hudak reinforces the new bi-partisan notion of what choice means to women. It also is sure to have anti-gun politicians in Colorado extremely uneasy.

Currently Democrats are so afraid of losing another recall election that they are considering forcing Hudak to resign in order to replace her with a party member and maintain their one-seat majority.  Furthermore, the shaken governor, John Hickenlooper (D), has suggested that national anti-gun groups stay away from Colorado this time.

If politicians are serious about empowering women, they better rethink their myopic view of what choice means to them.  Based on the direction of the Colorado recall elections, it apparently means the choice of a caliber…