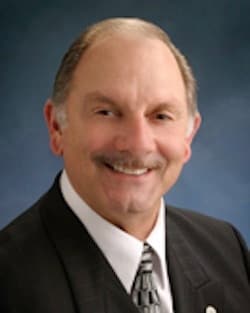 California has some of the toughest gun control laws in the country.  That statement rang true even a month ago, before Gov. Jerry Brown recently approved 11 new gun control laws, including one that will ban hunting in the state with lead ammunition by 2019 and another that requires people selling or transferring ammo to record the identification of the buyer and report the sale to the state Department of Justice.

But according to some residents of Sunnyvale, a suburb of Silicon Valley, California’s existing gun control laws and the new ones approved by Brown did not go far enough.

Hence the introduction of Measure C, a comprehensive gun-control ordinance that Sunnyvale residents will vote on on Nov. 5.

If passed, Measure C would require gun owners to: report a lost or stolen firearm to law enforcement within 48 hours, keep their guns locked up at home if they’re not in the immediate possession of the owner and destroy and/or sell off any magazines that hold more than 10 rounds of ammunition.  Additionally, gun dealers would have to track and report ammunition sales to customers.

“Our federal government can’t seem to set aside the partisan BS and deal with this, so it’s got to start from the bottom up. Why not Sunnyvale?” Mayor Tony Spitaleri, a retired Palo Alto fire captain, told the San Francisco Chronicle. “Why not Mountain View next? We’ve got to start somewhere.”

Spitaleri pointed to the mass shooting at Sandy Hook Elementary School in Newtown, Connecticut, as the impetus for Measure C.  He spoke about his emotional reaction to the tragedy which left 20 school children and six adults dead.

“Like everyone, I got angry. Really angry,” Spitaleri said. “Are we getting numb to these shootings? Are we accepting this as normal? When are we going to start taking a stance?”

Aside from his desire to prevent another mass shooting, there is another factor in play.  That is, New York City Mayor Michael Bloomberg’s pro-gun control organization, Mayors Against Illegal Guns, which is the biggest contributor to the “Yes on C campaign.”  According to SF Chronicle, Bloomberg’s donated $3,000 to Spitaleri’s gun control push.

Naturally, Bloomberg’s involvement drew the ire of the National Rifle Association, which sees Measure C as being both redundant, in the sense that state laws already cover magazine limits and ammo purchases, and unconstitutional.

“Measure C presents an opportunity to litigate some unresolved Second Amendment issues that need to be resolved by the courts, including the Supreme Court,” Chuck Michel, West Coast counsel for the NRA, told the SF Chronicle. “Plus, it’s useless policy, given Sunnyvale’s nonexistent crime problem.”

With a crime rate of 15 per thousand residents, Sunnyvale already has one of the lowest crime rates in the state.  So, from the NRA’s perspective, Measure C is more about Bloomberg’s agenda than it is about public safety. 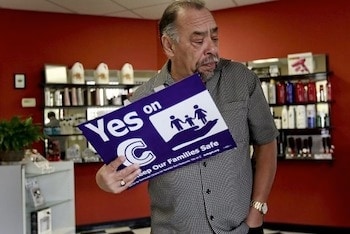 “Measure C is put forth by a billionaire New York mayor trying to push his social agenda,” Michel said. “It’s a solution in search of a problem, and it’s going to cost Sunnyvale taxpayers a lot of money” to defend the ordinance in court should it pass.

The public’s reactions to Measure C are divided, some believe it’s a step in the right direction while others see it as a nuisance that will have no tangible impact on crime.

Barbershop owner and manager Lou Soliz supports Measure C, explaining that he became an advocate for tougher gun laws after a customer’s daughter was killed at San Jose State in 2011.

Liquore store owner Bai Nguyen agreed with Soliz, saying that he was once robbed at gunpoint while working at his store.

“A gun to your head is scary,” he said. “The less guns, the better. We don’t need that stuff.”

Though, of course, Sunnyvale has some pro-gun folks as well.  Tattoo artist Michael Wilson argued that more gun laws will not stop the wrong people from obtaining firearms.

“If you don’t like weapons, that’s fine, don’t have them,” he said. “There’s always been crazy people killing other people. Ban machine guns? That’s not going to stop it. … I think there’s already enough gun laws.”