People for the Ethical Treatment of Animals has unveiled its “Air Angel,” a quadrapcopter drone meant to ensure hunters adhere to the law. 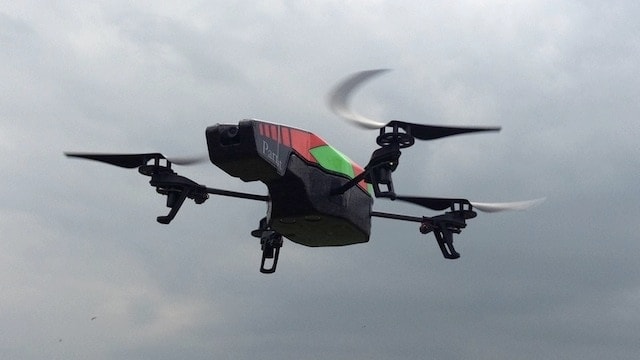 The “Air Angel” is actually a Parrot AR Drone 2.0 with PETA decals plastered to its sides.

Recently, People for the Ethical Treatment of Animals said it was acquiring drones, and now that the animal rights group has released a final product, the group believes it will aid in raising awareness about the cruelty of hunting, though they may not legally be permitted to use them, Mashable reported.

According to Petacatalog.com, the “Air Angel” drone is a four-motored quadracopter capable of hovering high above the tree line while beaming captured video directly to a cell phone. Its purpose is to use the footage to alert game wardens of hunters engaging in illegal activity such as “drinking while in possession of a firearm, injuring animals and failing to pursue them, and illegally using spotlights, feed lures, and other nasty but common hunting tricks.”

PETA spokeswoman Lindsay Rajt told Mashable that drone users have already used the Air Angel to report bow hunters after they violated the rule that states hunting shall not begin until “one-half hour before sunrise.”

“[Authorities] were very receptive, and they said they were going to look into it,” Rajt said. “I think people should call in violations as they see them.”

But not everyone looks upon the aircraft with such affinity. President of the Massachusetts Bowhunters Association Dennis Boomer feels the drones are not just unnecessary, but redundant. Many hunters aren’t about having the drones buzzing over their head as they stalk their game.

“Hunters already have a police force that watch us, they’re called game wardens, Hayden told Mashable. “Obviously, they more than protect the wildlife in Massachusetts. They would arrest a hunter if they were doing something wrong.”

The quadracopters may be more than just a nuisance, however. Hayden gave a word of caution to those looking to spend $324.99 on “the new hobby for animal protectionists,” saying its use would be a violation against the law that protects hunters against those seeking to “drive or disturb wildlife or fish for the purpose of interrupting a lawful taking.” The law also states no one shall “block, follow impede or otherwise harass another who is engaged in the lawful taking of fish or wildlife.”

“Anybody that’s going to go out there and buy one of these things to go watch hunters, it’s a form of harassment, and they’re breaking the law,” Hayden said.