A store clerk was fired from his job at 7-Eleven for violating the company’s “no weapons” policy when he pulled a gun on a man who splashed hot coffee on another clerk during an attempted robbery in St. Petersburg, Florida.

The robbery occurred earlier this month, but police just recently released video surveillance in hopes of catching the suspect, according to the Tampa Bay Times.

On the video, the man, who is believed to be homeless and stays nearby, can be seen getting the coffee then walking to the counter to pay for it. As one clerk opens the register to get the man change, another clerk, Robert VanConett can be seen standing next to him.

With the register open, the man throws the hot coffee on the clerk, who backs away, then the man pulls out a knife as he grabs cash out of the register. But as the man grabs the money, VanConett grabs for his concealed handgun and aims it at the man.

“I just wanted to get him out of the store and it worked,” VanConett told WTSP.

No shots were fired and nobody was injured, not even the clerk with the hot cup of coffee thrown at him. But days later VanConett was fired from his job for violating the company’s “no weapons” policy.

Yet VanConett said, “I’d do it again. It was just the simple fact I’m not going to sit there and get stabbed or get cut or anything like that.” He added, “The guy looked like he was on drugs or something.”

“It’s a little scary at times working overnight,” said VanConett, who has been with the company for six years. 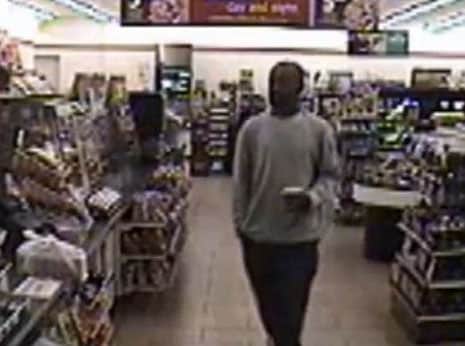 Anyone with information on the suspect from the 7-Eleven robbery in St. Petersburg is asked to contact Detective Wallace Pavelski at (727) 893-4823.

As robberies at local convenience stores continually increased, so did VanConett’s uneasiness. So he made the conscious decision to start carrying his gun to work, even though he knew it was against company policy.

However, VanConett, who has a valid concealed carry permit, didn’t break any laws, only the company’s rules.

“We certainly understand people have a right to arm themselves … so as long as those firearms are used lawfully, that’s all we really ask for,” said Mike Puetz, spokesperson for the St. Petersburg Police Department.

VanConett, who is now hoping for a safer job, is pleading with 7-Eleven to consider changing their policy, using examples such as that of another clerk at a Riverview store who was brutally stabbed to death more than 50 times during a robbery earlier this year. The clerk was found, still alive, by a customer who police believe entered just seconds after the stabbing. The customer did what he could to help the clerk, but the wounds were too extensive and the man died.

The company had little to say about their decision to fire VanConett or their strict no weapons policy.

“Our research tells us it’s not a good idea to pull a weapon when you’re confronted,” said company spokeswoman Margaret Chabris.

Opinions vary on whether or not VanConett should have lost his job, but he’s also not the only clerk that’s been in the news recently for being fired after bringing a gun to work.

Earlier this month, Shannon “Bear” Cothran, who was formerly employed as a clerk at a Shell station in Nashua, New Hampshire, for more than 10 years, was fired only hours after he stopped an armed robbery by pulling his Ruger LCP .380 handgun on the would-be robber.

Again, no shots were fired, nobody was injured, but Cothran still lost his job because he had violated the company’s no weapons policy.

Like VanConett, Cothran said if put in the same position, he would do the exact same thing and said that he would rather be without a job than in the hospital or in a coffin.

“I believe we have two choices: be a victim or stand up and defend ourselves. I chose to be responsible for my own safety, and for that, I have no regrets,” Cothran said.