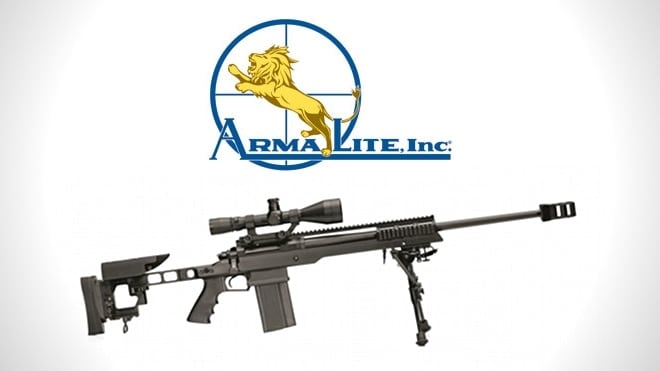 ArmaLite is working on a new version of their AR-30A1 series of rifles, the AR-31. The new bolt-action precision rifle is chambered for the more common .308 Winchester, making it more appealing to a wide user base that spans everything from competition shooters to military and law enforcement.

The AR-31 is based on the “Target Rifle” variant of the AR-31 series and features an extended 18-inch 20 MOA Picatinny rail for optics with plenty of room left over for other accessories such as a laser rangefinder.

ArmaLite announced the AR-31 at National Association of Sporting Goods Wholesalers convention and the details are still thin. We expect to find out more at SHOT Show in January 2014. Currently the company does not have a product page listed for the new rifle.

The main differences are that the AR-31 has a new short action to compliment the shorter cartridges — the AR-30A1 series is chambered for .300 Winchester Magnum and .338 Lapua Magnum — and it uses existing AR-10B double-stack magazines. ArmaLite manufactures AR-10B magazines in five-, 10-, 15-, 20- and 25-round capacities.

Note that these are not the same as Armalite AR-10 “waffle” or SR25-pattern magazines as the AR-10B magazines are different and have roots in the steel M14 magazine design.

The rest is unchanged from the AR-30A1 Target Rifle models and ArmaLite states that the new rifle is fully-capable of sub-MOA accuracy, presuming quality ammunition is used. The muzzle brake looks the same as the design used on their AR-30A1s, which is quite effective.

It has a fully-adjustable aluminum stock that can be tailored for individual shooters. In addition to an adjustable cheekpiece the scope telescopes for a length of pull from 13.6 to 15.6 inches.

We don’t have all the specifications, but it’s safe to assume that ArmaLite will continue to use the same competition-grade barrels and other features like their proven “V-Block” bedding system. The finish appears to be the same combination of phosphated steel and hard-anodized aluminum.

The long-action AR-30A1 rifles weigh around 14 to 15 pounds and there’s no reason to expect the AR-31s to vary by much — unless they release a carbine-length model. In addition to the heft, the tactical rails and skeletal stock don’t make this an ideal hunting rifle. The AR-31 is a gun largely for competition and target shooters, and law enforcement agencies.

The Target Rifle variants are priced around $3,500 and we would not be surprised if the AR-31 has a similar MSRP, but it would be nice if the new model comes with a lower price; it is, after all, a more mainstream rifle.

This is an interesting expansion of the middleweight AR-30 series of rifles and some may say it’s even overdue. This is one gun we look forward to meeting in person.