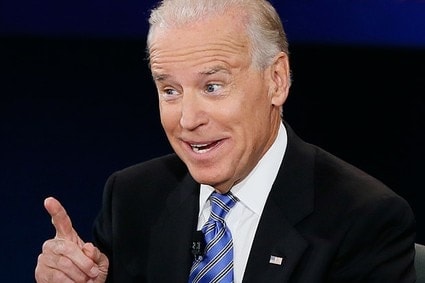 It wasn’t presented as a demotion or a “Hey, this guy is not only useless, but he’s detrimental to our cause,” but rather as a move that hews to a new bottom-up gun control strategy, one targeting state capitols, municipalities and local networks as opposed to a top-down tactic that goes directly after sitting members of Congress. The objective is pressure lawmakers into supporting tougher gun laws via their constituents, not via the bully pulpit.

“If there’s more the president could do to change a couple Republican votes, we have no reason to think he wouldn’t do it,” said Mark Glaze, director of Mayors Against Illegal Guns, noting how both Obama and Biden are hamstrung. “But this is now about applying Chinese water torture to senators for as long as it takes and winning in the states.”

Biden tacitly endorsed this approach at the Clinton Global Initiative in September, where he touted the efforts of the single most powerful voice in the modern gun control movement, New York City Mayor Michael Bloomberg.

“One of the things that President Obama said at the memorial to the victims of the Navy Yard shooting is that change isn’t going to come on this issue from Washington; it’s going to come to Washington,” Biden said of Bloomberg. “And when it does, it’ll be because — they used to say in my neighborhood, because Mike has sent it.”

Taking over for Biden, who was the point person for Obama’s gun control agenda spawned in the wake of the mass shooting at Sandy Hook Elementary School in Newtown, Connecticut, is Valerie Jarrett, a senior aide to the president who oversees the White House Office of Public Engagement.

According to Politico, OPE Director Paulette Aniskoff or official Paul Monteiro hold weekly meetings with representatives from all the major gun control organizations, including MAIG, the Brady Campaign to Prevent Gun Violence, Moms Demand Action, the Center for American Progress, Organizing for Action and Americans for Responsible Solutions. Collectively, they’re known as the ‘Gun Violence Table.’

“It’s pretty fair to say that the vice president’s people were more heavily engaged when there was a game on the legislative front,” Creamer told Politico.

In other words, since the Senate failed to pass several major gun control bills back in April, including a ban on so-called ‘assault weapons’ and an expanded background check requirement, Biden has not been as aggressive on the issue. In fact, some gun control activists admitted to Politico that they hadn’t heard from him since May. But to them it makes no difference because there’s not much he or his chief of staff Bruce Reed could do right now to change the landscape.

“There wasn’t a formal memo that went around passing any baton, but it’s what made sense,” said the gun control activist who spoke on the condition of anonymity. “What would we say every week in a meeting with Bruce Reed right now? We talk about what we’re doing to keep this issue in the front of the American consciousness.”

While there may be some truth to this reasoning and grassroots strategy, it’s hard to imagine that gun control advocates were ever really thrilled with Biden at the helm. Not for nothing, but the guy has a tendency to put his foot in his mouth:

Plus, it doesn’t appear that his peers take him all that seriously, especially Republican lawmakers, which are the folks he needed to win over if any of those gun control measures stood a chance at clearing the Senate. In the end, Biden taking a backseat in the gun control movement is probably a good thing for gun control advocates and their cause.