Imagine this: The war (game) is raging around you and your platoon (group of riends) is hunkered down in the trenches (couch), frantically calling for fire support (beer) over the radio. As their leader (host), you know what you have to do. With a steely gaze you look out at your men as you depress a button on your keychain, sending a mortar storm of brew to your thirsty buds, saving them from certain doom as you set your chin and walk away. 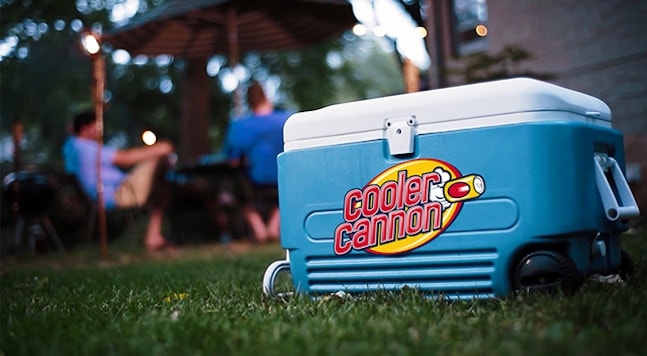 The Cooler Cannon is like having a personal mortar team of beer at your ready disposal.

But really though, why walk all the way to the cooler to grab another beer when you could press a button and have your cooler shoot one right to you?

Iowa-based product manager Derek Hoy must have thought of the same question when he designed and created the Cooler Cannon, a remotely operated contraption that fires ice-cold liquid libations straight from the cooler and right into the palm of your hand, Laughing Squid reported.

Hoy has a working prototype up and running and has already wowed audiences everywhere. But the design isn’t quite cost effective and the Des Moines businessman is looking for some support for his KickStarter project. 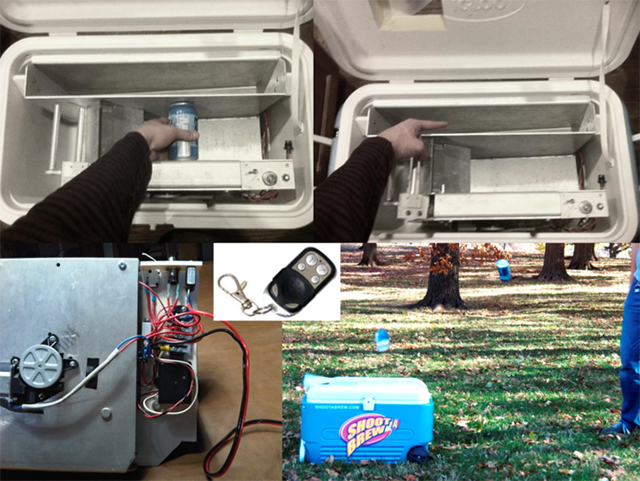 The self contained device is powered by a 12V battery.

Hoy writes of the Cooler Cannon, “The beauty of this concept is its simplicity. At the core of the launching mechanism is a lever and spring. When you hit the RF wireless remote, the receiver activates a small DC motor powered by a 12V battery. It makes one revolution and acts as a cam on the way down and then as a release mechanism tripping the latch on the way up, all in under two seconds. You stack the cans in the magazine, add ice or ice packs in the dedicated cavity on the side and boom, you’re tossing beverages to your buddy with the touch of a remote.”