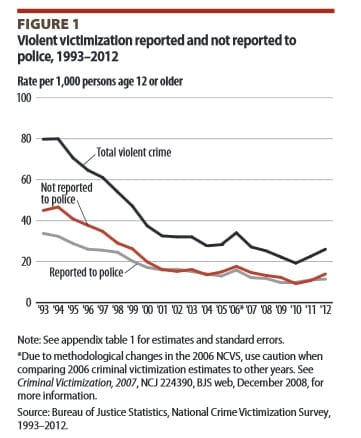 Violent crime rates are up for the second year in a row, possibly indicating that the nearly two-decade long drop in crime has come to an end, according to a Bureau of Justice Statistics report published last week. But equally disturbing is how many of those crimes – more than half — go unreported.

While violent crime rates remained about the same from 2009 to 2010, following a steady decline of 72 percent since 1993, in 2011 there was a 17 percent increase. Again in 2012 violent victimizations, which mostly consisted of simple assault, rose 15 percent while property crimes were up 12 percent from the previous year, with the majority of the increase made up of theft.

The data for the statistics was gathered from more than 92,000 households in the United States through the annual National Crime Victimization Survey, which has been responsible for gathering such data since 1973. The information was on victims 12 years old and older.

Violent crimes consisted of rape or sexual assault, robbery, aggravated and simple assault and property crimes included burglary, theft and motor vehicle theft. However, homicides rates, which declined 48 percent from 1993 to 2011, were not part of the survey’s data. 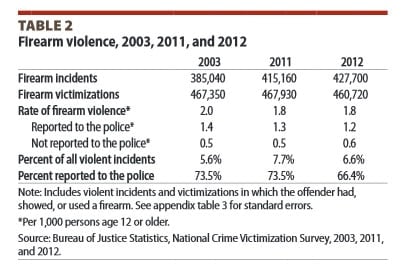 The report also showed that residents in urban areas continue to make up the majority of victims. Additionally, there was no significant change from 2011 to 2012 in the rates of domestic violence, intimate partner violence and violence involving an injury or firearm violence.

“We’ve plateaued. At this point, I don’t think we’re going to see any more decreases in crime,” James Alan Fox, criminologist of Northeastern University in Boston, told USA Today. “The challenge will be making sure crime rates don’t go back up.”

While the FBI’s 2012 Uniform Crime Report, which was released in September, and the Bureau of Justice Statistics’ report both show a slight increase in violent crime over the last two years, that doesn’t necessarily mean that the country is in for a significant influx of crime.

“It’s not exactly a crime wave,” James Lynch, chairman of the University of Maryland’s criminology and criminal justice department explained. “It’s more like a flattening out. I don’t see this as terribly alarming, but more as something to pay attention to.” 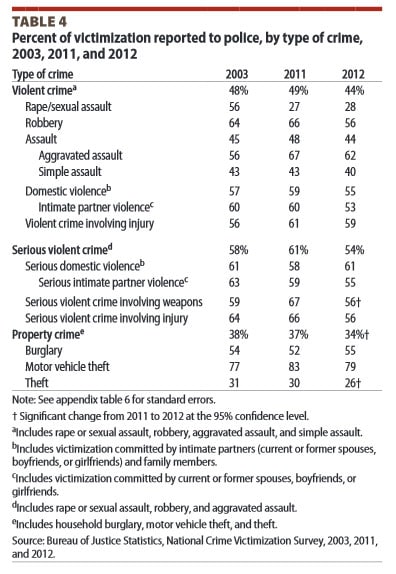 Fox also explained some changes in policing, including criminals remaining behind bars longer and the development of better crime-fighting technology, compared with that of the mid 90s that have had an effect on crime rates.

“Going back 20 years or more, policing was done blindly,” Fox said. “Now, due to technology, police can be much more proactive in dealing with crime problems before they get out of hand.”

“You don’t solve the crime problem. You only control it,” he continued. “When you let up on the gas, bad things will happen. This plateauing and inching up a bit is just a warning to us that we have to keep on investing in crime prevention and crime control.”