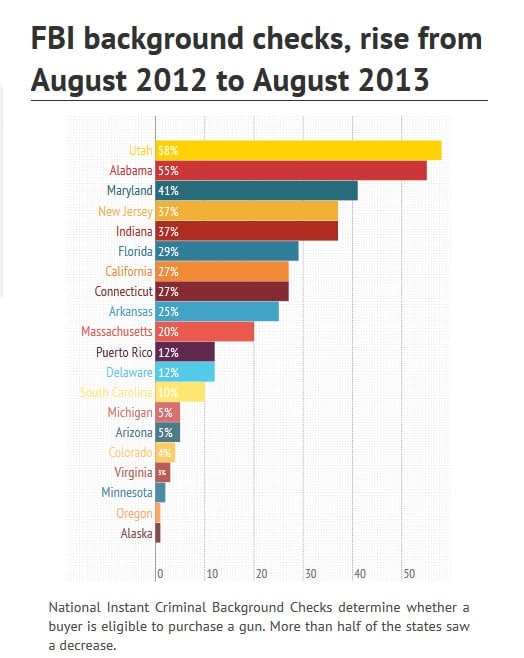 A comparison of gun states with the highest background checks in August 2013 compared with August 2012. (Photo credit: AL.com)

As the gun-buying frenzy is starting to level off in most states, Alabama has seen a second rise in gun sales this year, AL.com reports.

Some attribute the early season spike to a new state law adopted Aug. 1, which now allows 18- to 21-year-olds to apply for concealed carry permits. Yet others argue that gun sales have little to do with the new law and that’s just the nature of the business. Additionally, even though the younger residents are now able to apply for a concealed carry permit, they still have to be 21-years-old or older to purchase a handgun.

“I think maybe it’s more of the guns that were hard to get are back in,” said Larry Barnett, owner of Larry’s Pistol & Pawn in Huntsville.

Barnett said that he never really saw much of a drop in business, except for the usual decrease during the summer months. In fact, according to the FBI’s statistics on firearm background checks for 2013, almost every state showed a drop in background checks starting around May, but started to climb again in August.

Although the National Instant Criminal Background check system does not directly reflect gun sales, it does give an idea of how many are sold by Federal Firearms Licensees.

“Gun sales go down,” Barnett said of the summer months. “People don’t shoot as much.”

But as the summer months fade away, the cooler weather rolls around and hunters and gun enthusiasts once again go outdoors for a little firepower fun. Historically, gun sales start to climb around August and September. Leading the background check climb this year are Alabama, Florida, Illinois, Indian, Pennsylvania, Texas and California.

While Alabama was at the top of the gun-buying frenzy, the state continues to hold second place the nation for background checks with 55 percent more in August of this year compared with last and 63 percent more for the month of September.

Utah saw the biggest jump in August from last year with an increase of 58 percent, but Maryland, with the looming Gun Safety Act that took effect Oct.1, overshadowed all of the other states in September with an enormous increase of 421 percent.

“My customers seem to be very in tune with politics. They’re scared, really. … I can’t pinpoint it down to a specific law,” he said, adding that he feels the recent influx in activity isn’t really another increase, but rather just a continuation of the boost from five years ago when Obama was first elected. 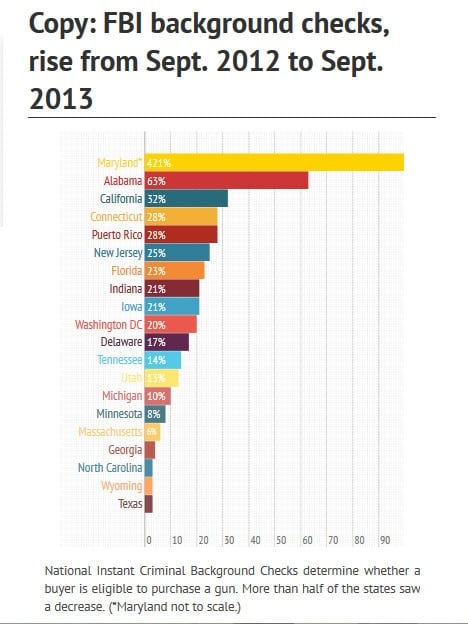 A comparison of gun states with the highest background checks in September 2013 compared with September 2012. (Photo credit: AL.com)

After Obama’s re-election and the subsequent shooting at Sandy Hook Elementary, Alabama, like many states in the country, experienced shortages of ammunition causing many retailers to set limits on the amount that individual customers could purchase.

Alabama’s Madison County Chief Deputy Chris Stephens agrees with Williamson’s observation on consumers and politics, but also reiterated that background checks were already up 24 percent in June before the new state law took effect in August. Stephens said that there continues to be widespread concern over possible gun control measures and those concerns will drive sales up.

Nelson Wingo, owner of Campbell Hardware and Sporting Goods in Robertsdale, attributes the increase in sales to federal influences, including the election and re-election of Obama, rather than newly adopted state laws as well. However, Wingo doesn’t think that the checks will continue to climb as they have in the past five years.

“I’m assuming it will level off unless there’s another big emergency in the country,” he said. “People are still afraid. They don’t know what this administration is going to do.”