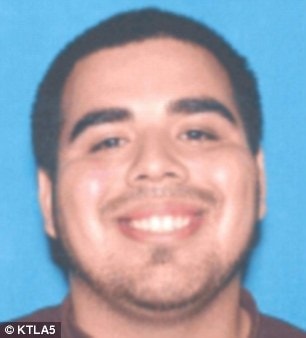 Paul Bracamontes was a seemingly normal college student who was majoring in human services and had done volunteer work earlier in the day at an event for foster kids.

A man who was apparently hallucinating and violently ranting about zombies was fatally shot by a homeowner after he broke into the family’s new home as they slept early Sunday morning in Yorba Linda, California.

The homeowner, whose name has not been released, was awakened just after 3 a.m. to the sound of a man screaming in his backyard, the Los Angeles Times reports. The homeowner grabbed his gun and went to see what the commotion was about as his wife called 911.

Moments later, the man, later identified as 22-year-old Paul Michael Bracamontes of Fullerton, shattered the windows of the sliding glass door and entered the home.

Neighbors told the ABC affiliate that they heard a lot of arguing between the two men and one of the men sounded like he was drunk.

While the homeowner’s wife remained on the phone with the 911 dispatcher, the argument between the men, which included a violent rant about zombies, apparently escalated. Bracamontes made multiple threats to the man and also indicated that there were other people outside of the home as well.

The homeowner eventually shot the intruder. Neighbors say they heard three gunshots, but authorities have not said how many times Bracamontes was shot.

When deputies arrived minutes later, they found Bracamontes inside the home who was pronounced dead at the scene.

The family, which included a baby, was not injured during the incident.

Family and friends told investigators that Bracamontes had been to a party earlier that night and was hallucinating and making “inappropriate” comments about zombies and talking about needing to get to “higher ground” and wanting to get a gun.

An autopsy, which included toxicology screenings to determine whether Bracamontes was under the influence of drugs or alcohol, was scheduled to be performed on Tuesday. However, the results could take several weeks.

While investigators said that they believe the break-in was an isolated incident, area residents still feel uneasy about the thought of this type of thing happening in their neighborhood, which the FBI recently named as being one of the top 20 safest cities in California.

“This is Yorba Linda,” resident Tom Perkins said. “Nothing happens in Yorba Linda.”

In addition, the family had just moved into their house about two months ago and already their sense of security has been shattered.

Authorities said that they believed Bracamontes may have scaled a fence behind the couple’s home to gain entry into their backyard.

Bracamontes was said to be wearing baseball pants, as part of a costume, but authorities did not confirm that detail. In addition, family and friends have said breaking into someone’s house doesn’t mesh with Bracamontes’ personality.

His sister, Krystal Preciado, described him as a conscientious college student, he attends Cal State Fullerton and majors in human services, who didn’t do drugs and in fact had done volunteer work earlier in the day at an event for foster kids.

The preliminary investigation indicates that the shooting was justified, as the homeowner acted in self-defense. However, the investigation is ongoing and the case will be sent to the Orange County district attorney’s office for the final decision.