Turnbull brings back a classic with their 'Heritage' M1911 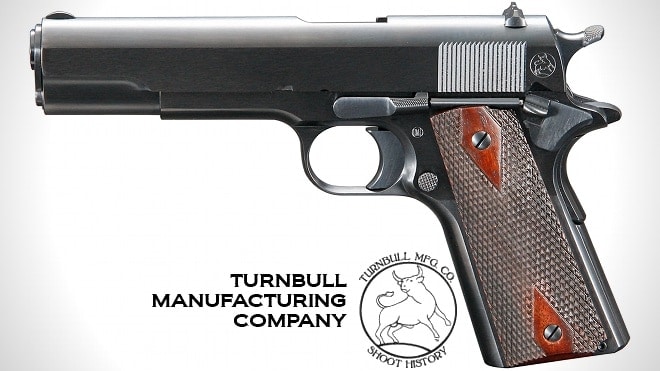 While many people might not notice the small changes that separate the pre-A1 pistol from other 1911s, this version will stand out for 1911 aficionados.

This has been a long-term project for Turnbull, who has been keeping notes on the original M1911, studying the pistols that they have received for restoration.

The end result is a new-manufacture Model 1911 that is remarkably similar to the earliest examples of John Browning’s service pistol.

What makes the M1911 different from the M1911A1 are a host of little changes. The grips are different, with double-diamond checkered wooden panels and the grip safety doesn’t have a beavertail.

The hammer and trigger are different as the M1911 has a longer trigger and a shorter, wider spur hammer. The forged frame is not relieved at the trigger along the grip and the trigger guard is smaller. 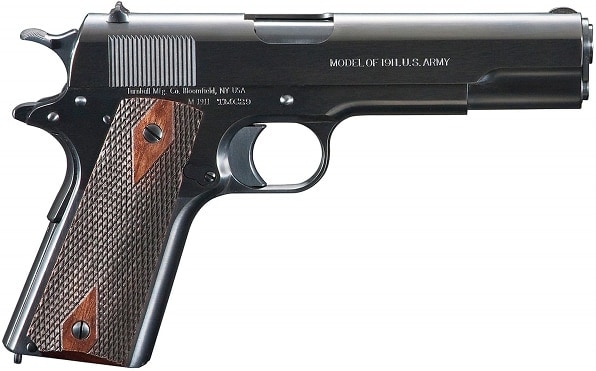 The rear sight is different (although you can’t see it in the photos); the M1911 has a rounded rear sight with a semi-circle notch and the front sight is rounded.

The slide stop and safety are smaller and checkered, not serrated. The safety is also squared with sharper edges. The slide has a much smaller ejection port and a more pronounced radius across the topstrap.

Each Turnbull Model 1911 is hand-made like the original pistols, given a period-correct Carbonia charcoal blue finish that is hand-polished to a bright shine. About the only changes are that it sports the Turnbull trademark and rollstamp.

These are truely heirloom-grade handguns; at the same time, Turnbull makes guns that last. While they will do just fine as safe queens they will also serve well at the range.

Priced at $1,950 and built to-order, they’re still less expensive than an original M1911. For those who want the feel of history and want an amazing shooter, these are extremely compelling.

There are many ways to spend a couple thousand dollars on a 1911; few are literally as original as the Turnbull Model 1911.

“Turnbull Mfg. Co will be making new, modern manufactured 1911 pistols, chambered in .45 ACP, explains the product page. “These accurate reproductions of the iconic 1911 closely resemble one made in early 1918. As the premier restorer of original 1911 pistols, we are using our years of experience to finish these modern pistols just like the originals.”