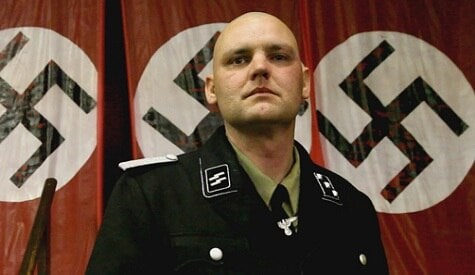 Joseph’s father, Jeffery Hall, was a local leader of the National Socialist Movement and had a meeting of the group in his home the day before he was shot. (Photo credit: CBS News)

A Riverside, California judge sentenced the teen boy, who fatally shot his neo-Nazi father point blank in the head as he slept, to a state-run youth correctional facility on Thursday, despite pleas from the defense to send him to a private facility where he could receive treatment after years of being surrounded by abuse and violence.

If Joseph Hall were an adult he would have faced 40 years to life in prison for killing his father, NBC reports. However, as a 13-year-old youth, he can only be held until the age of 23. He will likely be eligible for parole by the age of 20, but could possibly have a parole hearing in as little as five years if he exhibits signs of rehabilitation.

Unlike sentencing with an adult offender, the judge must recognize that the youth offender would benefit from the facility in which they’re being placed. While the judge found that the state facility would provide those benefits to the teen, his defense argues that he will not receive the proper therapy and attention he needs for complete rehabilitation.

Joseph, whose home was visited by child protective services more than 20 times prior to the shooting, has continually slipped through the cracks of the system. His attorney, Punam Grewal, said that the “horrific” outcome of the sentencing was a “miscarriage of justice.” A sentence that she, and others, fear will continue to allow the boy to slip through the system rather than help prepare him for life in the outside world.

“When he comes out at 23, we’ve got a huge problem,” Grewal said prior to the sentencing.

Riverside County Deputy District Attorney Mike Soccio, who believes the state facility, with its military style setting, was the most realistic option for Joseph, said that his concern for the teen is genuine and that he will get a “significant amount of therapy.”

The case generated a great deal of attention, partly because of the boy’s young age when he shot his father, only 10-years-old, making him one of the youngest known accused murders in the history of the country, and partly because of his father’s outspoken and unapologetic white supremacist beliefs.

It also sparked debate over whether the young child was simply a cold-blooded killer or acting in what he perceived as an attempt to protect himself and his family. 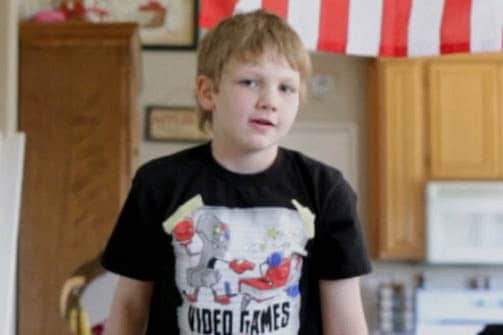 The boy told investigators that he had once seen an episode of a crime TV drama in which a boy shot and killed his abusive father and nothing happened to him. (Photo credit: CBS News)

Joseph endured years of abuse from his father and also watched his step-mother be abused. In a heated argument between his father and step-mother just days prior to the shooting, his father threatened to leave and set the house on fire – with his wife and children still inside.

After the shooting, Joseph later told police he was afraid that he would have to choose between living with his father or his step-mother, who originally confessed to the murder in an effort to protect the child, if the two divorced.

Yet even Joseph’s paternal grandmother, whose own son was killed at the hands of the boy, called him a “good kid” following the sentencing, also stating that he has “some issues” that need to be “addressed, so he doesn’t hurt anybody else — or himself.”

In an unprecedented move, Soccio, who was originally responsible for convicting the boy, requested the judge’s permission, which was granted, to visit Joseph during his incarceration.

“My hope is that … he can come out as undamaged as possible,” Soccio said and added that it’s “hard not to get attached to Joseph.”

The teen’s defense attorneys also indicated that they would appeal the judge’s ruling.