Details are still emerging surrounding a shooting at Los Angeles International Airport around 9:20 this morning when a gunman shot and killed at least one TSA agent and wounded several others, federal law enforcement authorities told ABC News.

The suspect, a male, is believed to be a U.S. citizen in his early 20s.

According Patrick Gannon, Chief of the LAX Airport Police, the suspect, a “lone shooter,” “pulled an assault rifle out of a bag and began to open fire in” Terminal 3 Friday morning.

Soon after opening fire at a TSA checkpoint in Terminal 3, airport police confronted the shooter and a gunfight ensued. The suspect was subdued and is now in custody, Gannon confirmed.

Information on the victims has not been released, but Ronald Reagan UCLA Medical Center said that it received three male victims from LAX. One was in “critical condition” and two where in “fair condition,” Hospital officials said.  There have been reports that all of the victims were TSA agents, though that has not yet been confirmed.  Also the total number of victims is not clear at this point. 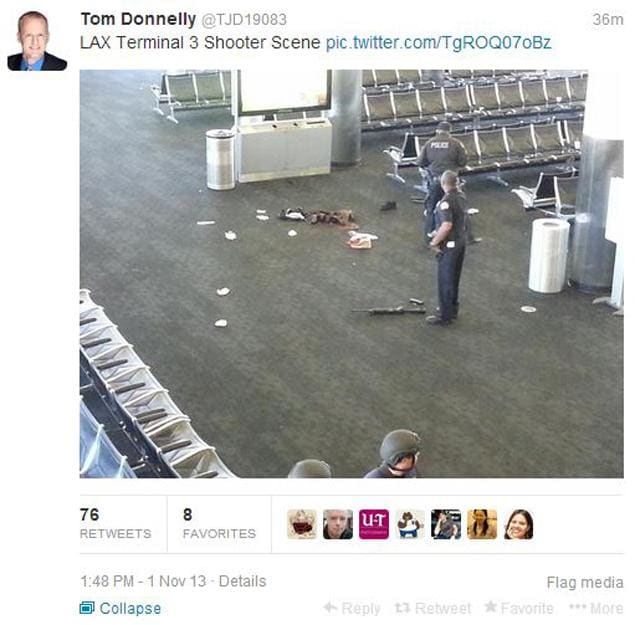 A photo of the rifle that the suspect allegedly used.

Tom Lagos, a bystander at the airport, described the scene to the New York Daily News.

“It was surreal,” Lagos said. “My wife and I were waiting for our flight to Newark at Gate 33 in the Virgin terminal, and we just saw a stampede of people headed in our direction with incredible fear in their eyes.”

Lagos explained that TSA employees began opening up emergency exists so that panicked travelers could run out onto the tarmac. After helping his wife to safety, he went to get his luggage and saw the gunman stalking through the terminal.

“He was alone, wearing a lot of baggy clothes and a dark flannel shirt,” Lagos recalled. “He was a slender, young white guy and walking with this long gun. It was so eerie. He wasn’t in a hurry, not really engaging anyone. He looked like he was moving in a methodical way.”